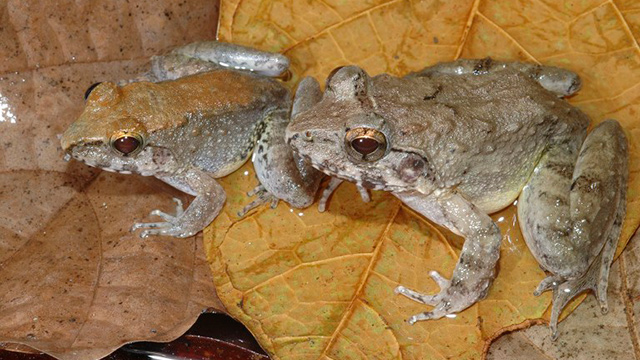 MIAMI, USA – In the depths of an Indonesian rainforest, scientists have identified the first known frog that gives birth to tadpoles instead of laying eggs, according to research published Wednesday, December 31.

Known as Limnonectes larvaepartus, this member of the Asian group of fanged frogs was first discovered decades ago by Indonesian researcher Djoko Iskandar.

Scientists have long thought these particular frogs likely gave birth to tadpoles, but they had never seen the creatures mate or spawn firsthand.

But they found new evidence of the frogs’ reproductive behavior recently when University of California, Berkeley herpetologist Jim McGuire, who was exploring the Sulawesi Island rain forests one night, grabbed one that he thought was a male and found instead it was a female that had about a dozen slippery, newborn tadpoles with her.

“Almost all frogs in the world – more than 6,000 species – have external fertilization, where the male grips the female in amplexus (the frog mating embrace) and releases sperm as the eggs are released by the female,” said McGuire, whose study appears in the journal PLOS ONE.

“This new frog is one of only 10 or 12 species that has evolved internal fertilization, and of those, it is the only one that gives birth to tadpoles as opposed to froglets or laying fertilized eggs.”

There is plenty of other unusual behavior in the frog world when it comes to creating offspring.

Some frogs in Africa that also engage in internal fertilization are known to give birth to froglets that never go through the tadpole stage.

Two known species of female gastric brooding frogs, both of which are now extinct, were “famous for swallowing their fertilized eggs, brooding them in their stomach, and giving birth out of their mouths to froglets,” it added. – Rappler.com