Purisima not a bad cop – Aquino 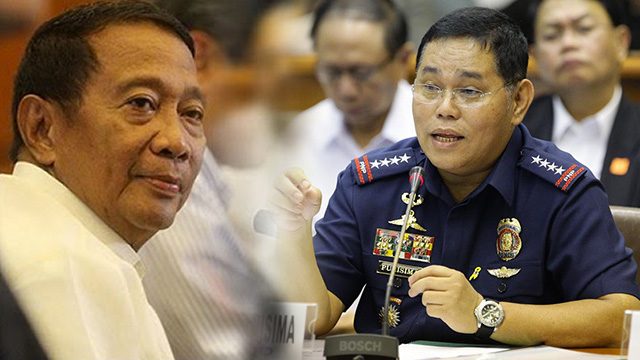 MANILA, Philippines – President Benigno Aquino III gave concise descriptions of people in his official life and two old flames, as required by the rules of a television show he appeared in Sunday night, January 4, but he could not help but bend the rule when asked about suspended National Police chief Director General Alan Purisima.

In the “Fast Talk” segment of ABS-CBN’s “Gandang Gabi Vice,” Vice Ganda – Jose Marie Borja Viceral in real life – showed the President photos of several personalities, whom he was supposed to describe in just one word.

He described  Vice President Jejomar Binay and Purisima, both in hot water over corruption allegations, as his long-time friends.

Aquino said he has been friends with Purisima since 1987, when he was part of his security detail as the son of President Corazon Aquino. Purisima was with the President when he was nearly killed by rebel soldiers involved in a coup attempt against the first Aquino administration in 1987.

The President portrayed Purisima as a good cop.

(If we have a negative image about our police force – that is not how I know him [Purisima]. He had made a lot of arrests and he does not spare anyone. He has a lot of colleagues who are now facing trial or behind bars because of their misdeeds.)

Purisima is under a 6-month preventive suspension as the Ombudsman investigates a plunder complaint against him.

Shown a photo of Binay, Aquino called the Vice President a “long-time friend” as well, and recalled that they were together during the August 21 Movement (ATOM) following the assassination of Aquino’s father, Senator Benigno “Ninoy” Aquino Jr.

Binay is is facing plunder charges for the alleged over-pricing of the Makati City Parking Building and the Makati Science High School Building. A Senate probe into the Makati building has spawned corruption allegations against him and his family. When shown a photo of Justice Secretary Leila De Lima, the President described the Cabinet official as  “serious,” especially  when work is concerned.

“She continues Jesse’s works,” Aquino said of Camarines Sur Representative Leni Robredo, wife of the late Interior Secretary Jesse Robredo, an exemplary local chief executive before he joined the Aquino Cabinet. The widow is reportedly also being courted to run in the 2016 elections.

Aquino was also shown photos of two women he used to date, celebrity stylist Liz Uy and Grace Lee, and gave the same description for both – “successful.” When Vice Ganda asked him, he confirmed that Lee used to be his “girlfriend.”

He described his youngest sister, actress Kris Aquino, as “interesting.”

Vice Ganda showed the President his own picture in the end, and Aquino said the comedian was “very interesting.”

When the comedian pressed him to say whether or not he found him beautiful, the President played a comic himself and said, “Kung tatanungin natin ang mga magulang niya, walang kaduda-duda (If we ask his parents, there is no doubt).”

Aquino described his typical day as thinking which problem of the country should be solved first, upon waking up. “Reading newspapers” is his breakfast and he calls his communications team right away to answer pressing issues.

After his presidency, Aquino said he would go back to their family home in Times Street in Quezon City and re-integrate himself into his old community which has a lot of popular dining spots.

He said he would also like to visit scenic locations that the tourism department is promoting. Aquino said he had been to Boracay for an hour, and only managed to look at the beach.

The President gamely responded to the questions of the comedian which included irreverent jokes on his thinning hair and his relationship status. He also cracked a joke and sang briefly, when prompted by the host. – with reports from Lynda C. Corpuz/Rappler.com