MANILA, Philippines – Filipinos remain a morally conservative lot compared to other societies, going by the results of a survey on where people in 40 countries stand on 8 moral issues.

Asked whether they personally found 8 issues “morally acceptable,” Filipinos agreed the least with abortion (2%) and extra-marital affairs (5%), according to a recently released survey by the Washington, DC-based Pew Research Center.

They were most open to using contraceptives, with 60% finding the practice acceptable.

The Pew Research Center conducted its 2013 Global Attitudes survey in 40 countries, asking 40,117 respondents their thoughts on 8 topics “often discussed as moral issues.” They were asked whether they found the following “morally acceptable,” “morally unacceptable,” or “not a moral issue”:

In some cases, respondents volunteered to say their opinion “depends on the situation,” while others either said they “don’t know” about the issues or “refused” to give any answers.

In the Philippines, the survey was done from March 10 to April 3, 2013, through face-to-face interviews “under the direction of Princeton Survey Research Associates International.” The survey had a margin of error: +/-4.5 percentage points.

There were 804 respondents, all 18 years and older, picked through “multi-stage cluster sample stratified by region and urbanity.” They were asked the questions in Tagalog, Cebuano, Ilongo, Ilocano, Bicolano – major Philippine languages.

The same percentage of Filipino respondents, 20%, found morally acceptable “sex between unmarried adults” and “gambling.” The difference was in the percentage of those who found the two practices unacceptable: 71% for pre-marital sex and 61% for gambling. This means there more respondents who considered gambling as a non-moral issue (18%) compared to sex before marriage (7%).

Opinions on “drinking alcohol” were nearly even, with 34% finding the practice acceptable and 39% finding it unacceptable; 24% didn’t consider it a moral issue.

The opinion on using contraceptive is consistent with an earlier local survey conducted by the Social Weather Stations. In a March 2014 survey, 84% of 1,200 respondents nationwide said “the government should provide free supply or service to the poor who wish to use any family planning method.” The same survey showed 72% favoring the reproductive health law, which the Catholic Church lobbied hard against.

*Total percentages in some items may not be equivalent to 100 due to rounding off of numbers.

What other countries think

The median of each issue based on results in 40 countries would show that societies surveyed were still largely conservative, just like the Philippines. 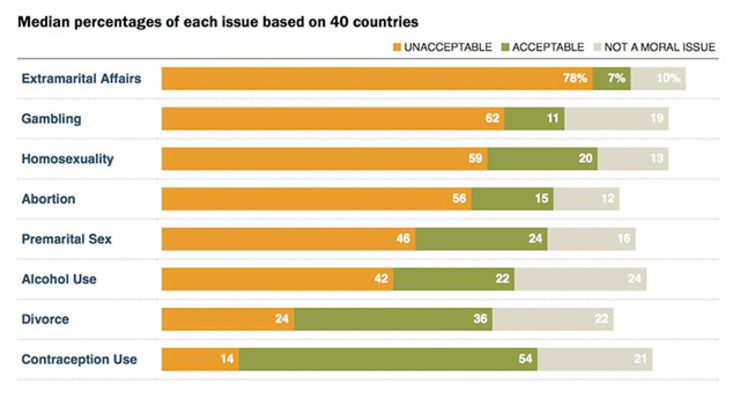 However, the order by which the countries in general found these moral issues unacceptable differed from the Philippines.

TABLE: Other Countries vs Philippines: Comparison of Unacceptability of Moral Issues

In all the moral issues probed, the Philippines didn’t figure in the top 5 countries that found them acceptable:

The detailed results per morality issue can be downloaded from here.

In November 2013 – months after the Pew survey was done – the Vatican asked bishops worldwide to survey the Catholic faithful’s sentiments on contraception, live-in arrangements, divorce, and gay marriage. The Catholic Bishops Conference of the Philippines heeded this request.

According to bishops in the Philippines, where more than 80% of the population are Catholic, the survey was a way of “giving an arena for the Catholic laity to be heard in the Church.” The results were to be submitted to the Vatican in time for a special meeting of bishops from around the world in October 2014.

The results of the Philippine survey were not publicized, although the synod then, attended by 200 bishops, opened with an announcement that Pope Francis, according to reports, was launching “a major review of Catholic teaching on the family that could have far-reaching implications for the Church’s attitude to marriage, cohabitation, and divorce.” – Rappler.com