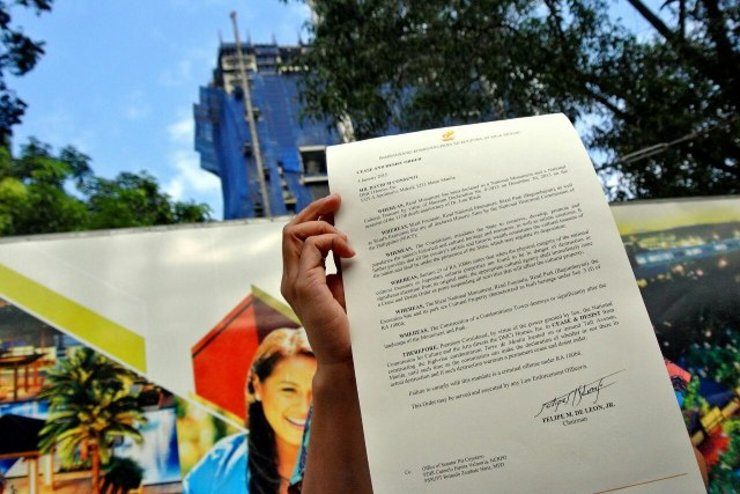 The Knights of Rizal (KOR), which asked the Supreme Court to stop the construction of the condominium, welcomed the decision of the National Commission for Culture and the Arts (NCCA) to issue a cease and desist order on Torre de Manila.

The KOR is just one of many heritage and cultural advocates questioning the construction of Torre de Manila for destroying the view of the historic Rizal Shrine, a monument to the national hero. They call the structure “pambansang photobomb” or the national photo spoiler.

KOR Spokesperson Michael Charleston “Xiao” Chua said his group “salutes” the NCCA for “standing up for the history of our country” and for its “firm resolve to prevent further desecrations of other heritage sites.”

Chua also linked the issue with the visit of Pope Francis to the Philippines from January 15 to 19. The pontiff will celebrate Mass at the Rizal Park on January 18, expected to draw 4 to 6 million people, one of the biggest crowds for a papal event.

“The Rizal Park has been part of the 3 previous papal visits. The holy popes faced the Rizal Monument and the park with both the scenic beauty of our national mall and the phenomenon of millions of Filipinos united for their faith,” said Chua, who is also a history lecturer.

“On Sunday, millions of Filipinos, the pope and the international community will see the park again, but now with the obstructed view of the skyline. The [order] by the NCCA hence had become timely and apt being issued at the time of the pope’s visit.” Chua said the KOR hopes property developer D.M. Consunji, Incorporated (DMCI) Homes will respect the NCCA’s decision. DMCI responded that it will only abide by a decision from the Supreme Court.

On January 5, NCCA Chairman Felipe de Leon Jr signed the order asking DMCI Homes to “cease and desist” from constructing the condominium located around Taft Avenue, Manila, until the commission can decide whether to issue a “permanent cease and desist order.”

The park was built in honor of national hero Jose Rizal, who was executed in the site in 1896 under Spanish colonial rule.

“The Construction of a Condominum Tower destroys or significantly [alters] the landscape of the Monument and Park,” the order said.

The NCCA also ordered DMCI Homes to appear at a hearing on January 28, and to comment on the cease and desist order on or before that date. As of December 19, the 49-story Torre de Manila was 30.7% complete, with structural work ongoing at the 32nd floor.

Cayetano also backed the NCCA order after leading the Senate investigation into the issue as chairperson of the Committee on Education, Arts and Culture.

“I fully support the NCCA in asserting its mandate to safeguard our heritage. The Rizal Shrine, as a national monument, is entitled to full protection under our national heritage law,” Cayetano said in a statement.

The senator has said that the condo project should have been allowed to build only up to 7 floors under Manila’s local zoning ordinances. Cayetano said she may recommend that the building be chopped off or demolished.

“It is not too late to rectify the lapses that led to the construction of the Torre de Manila skyscraper that has now marred the sightline of the historic Rizal Shrine. I believe the [order] is a step in the right direction towards correcting those mistakes and putting things back in order.”

Cultural activist Carlos Celdran thanked the NCCA for its move.

“Dear investors of DMCI #TorreDeManila, please call your agent now and get your money back – if you haven’t already …. Thank you, Senator Pia Cayetano and the NCCA for taking Jose Rizal’s heritage seriously,” Celdran posted on his Facebook page.

In past Senate hearings, Cayetano said DMCI Homes acted in “bad faith” for pushing through with construction despite resolutions from the Manila City Council citing hastily issued building and zoning permits, and calling on a suspension of construction.

DMCI has maintained that it was not aware of any violations, and it obtained all the necessary documents to begin construction.

Why veto funds for cultural agencies?

The Torre de Manila controversy along with similar issues surrounding other heritage sites showed the lack of coordination, and the need to clarify the mandates of different cultural agencies.

Besides the NCCA, other cultural agencies include the National Historical Commission of the Philippines, and the National Museum. Lawmakers said there should only be one “clearing house” assessing developments impacting on heritage sites.

In the Senate, Cayetano introduced provisions in the national budget to authorize these cultural agencies to fully retain their income from park fees and sales of cultural items.

Yet the President vetoed these provisions, a decision Cayetano questioned.

“These provisions only sought to give our cultural agencies the authority to retain income they generated from their own activities. Instead of making them begging for additional funding every year, isn’t it better that they use their own income?”

Cayetano said she will file a Senate committee report increasing the amount cultural agencies can retain from their income.

“It is high time that we, as a people, take the protection of our history, culture and heritage more seriously as these make up the intangible ideals that bind us as Filipinos and define our national identity.” – Rappler.com