Jan 16, 2015 12:12 PM PHT
Natashya Gutierrez
Facebook Twitter Copy URL
Copied
In a Palace event attended by Pope Francis and other Church leaders, President Benigno Aquino III cannot help but call attention to some members of the clergy who find fault in everything about him, including his hair 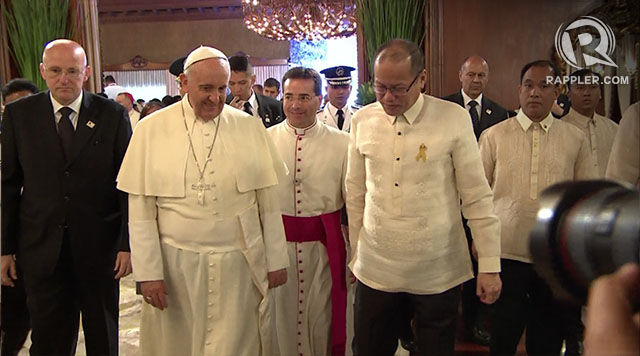 MANILA, Philippines – In the presence of Catholic Church leaders led by Pope Francis, President Benigno Aquino III complained about some members of the clergy who always seem to find fault in everything he does.

Aquino made the statement at the Rizal Ceremonial Hall on Friday, January 16, where he and the Pope issued their respective speeches after their meeting in front of an estimated 450 guests, including government officials and select private individuals.

“In contrast to their previous silence, some members of the clergy now seem to think that the way to be true to the faith means finding something to criticize, even to the extent that one prelate admonished me to do something about my hair, as if it were a mortal sin,” he said.

He added, “Is it any wonder then, that they see the glass not as half-full, or half-empty, but almost totally empty. Judgment is rendered without an appreciation of the facts.”

Aquino also called out some members of the clergy who were “silent” to the alleged abuses of the administration of Gloria Macapagal-Arroyo.

During that time, he said, there was a “transformation” of the Church which he and others found “hard to understand” since he grew up “so accustomed to having this Church, always at the forefront of championing the rights of all, especially those of the marginalized,” especially during the Marcos regime.

“We were taught that the Catholic Church is the true church, and that there is constancy, for it upholds the truth at all times. Hence, there was a true test of faith when many members of the Church, once advocates for the poor, the marginalized, and the helpless, suddenly became silent in the face of the previous administration’s abuses, which we are still trying to rectify to this very day,” Aquino said.

He added, “In these attempts at correcting the wrongs of the past, one would think that the Church would be our natural ally.”

Four days prior to the Palace event, the President admitted in a media interview that he had some “disagreements with the Church,” including his support for the passage of the Reproductive Health bill, which the Church opposed.

At the Palace event, Aquino said it was the Pope who restored his faith in the Church, saying, that his “statements bear witness to the compassion and understanding of Christ.”

He also thanked Francis for his role “as a unifying and revitalizing voice, not just among Catholics, but also among all peoples of goodwill.”

Aquino also said he found a “partnership” with the Pope.

“I believe that you (Francis) are a kindred spirit, one who sees things as they are, and is unafraid of asking, ‘Why not?’ Some of your statements might have been shocking or offensive to some peers,” he said.

The President added: “But Your Holiness is meant to be the instrument through which the Kingdom of God is allowed to flourish. In your example, we see the wisdom of continuing to ask, ‘Why not?’”

Aquino also said the Church’s teachings have been “central to my family’s advocacy.”

He recalled the difficulties experienced by his family during Martial Law – when the late Senator Benigno “Ninoy” Aquino Jr was detained – which deprived them of a “loving husband and father,” before thanking church leaders for speaking out against the dictatorship.

“The courage and daring displayed by the clergy solidified my belief: Especially during the Martial Law years, the Church of the poor and oppressed shone vividly. The clergy was always at the forefront of those wanting to emulate Christ and carry the burdens for all of us,” he said.

“Indeed, they nourished the compassion, faith, and courage of the Filipino people. This allowed millions to come together as a single community of faith and make possible the miracle of the EDSA People Power Revolution.” – Rappler.com