Jan 20, 2015 6:37 PM PHT
Natashya Gutierrez
Facebook Twitter Copy URL
Copied
Malacañang says President Benigno Aquino III did not intend to embarrass anyone and that his papal speech was based on the truth 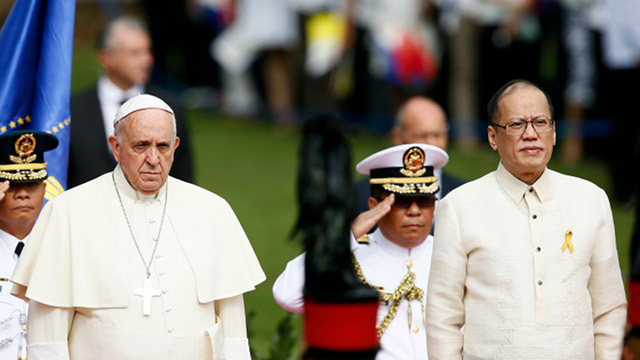 MANILA, Philippines – Netizens slammed the speech President Benigno Aquino III delivered before the Pope during his visit here, but Malacañang came to his defense, saying it was factual.

On Tuesday, January 20, Communications Secretary Sonny Coloma defended Aquino’s message, wherein he questioned the actions of Church officials in the country and for their alleged failure to stand up against injustice.

“The speech was truth-telling statement. If we review the entire text, we will understand the context. It was a narrative that is historically accurate and truthful and there is no singling out of any personality or any group,” Coloma said.

He added, “It is a personal testimony of someone who experienced the events he was talking about and became president and became a leader of a country that was welcoming the Pope.

Aquino made the statements before the Pope, government officials and church leaders, but Coloma said it was not the President’s intention to make anyone look bad.

“It was a truthful statement and there was no other purpose for that speech except to tell the truth,” he said.

In Aquino’s speech when he welcomed the Pope in Malacañang, the President said “some member of the clergy” like to criticize his administration, and “judgment is rendered without an appreciation of the facts.”

He also said “there was a true test of faith when many members of the Church, once advocates for the poor, the marginalized, and the helpless, suddenly became silent in the face of the previous administration’s abuses,” referring to the presidency of Gloria Macapagal-Arroyo who is now facing plunder trials.

Online, netizens expressed their disapproval of Aquino’s decision to voice his qualms before the Pope, calling it “inappropriate” and “off.” – Rappler.com