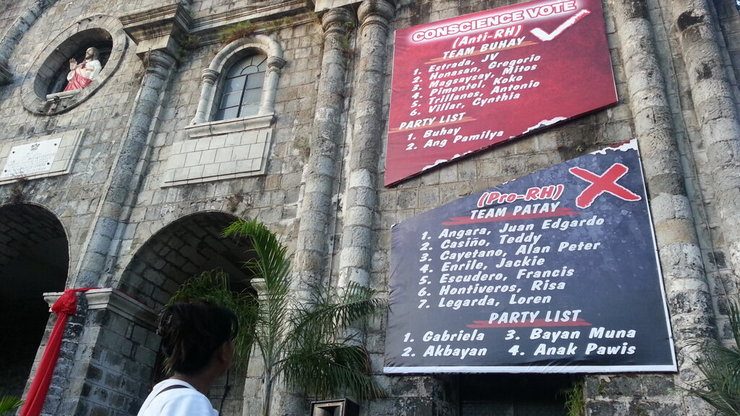 Facebook Twitter Copy URL
Copied
'With its decision, the Supreme Court has once again proved that it is indeed the last bastion of democracy,' says a statement from the Bacolod diocese's lawyers

MANILA, Philippines – The Supreme Court (SC) ruling that the poll body didn’t have the authority of take down tarpaulins campaigning against lawmakers who supported the reproductive health (RH) law was not just a victory for the Diocese of Bacolod, its lawyer said.

It was also a victory for the principle of separation of church and state, and of free speech, Ralph Sarmiento, the Diocese of Bacolod’s legal counsel, said in a statement on Thursday, January 22.

“With its decision, the Supreme Court has once again proved that it is indeed the last bastion of democracy in our system,” he said.

Voting 9-5 on Wednesday, the SC ruled that that the Commission on Elections violated the church’s right to free speech, expression, and property in ordering the removal of the tarpaulins.

During the 2013 campaign period, the San Sebastian Cathedral in Bacolod City installed on its facade “Team Buhay” tarpaulins, listign down names of senatorial candidates who, like the Catholic church, opposed the passage of the then-RH bill.

It also put up “Team Patay” tarpaulin, listing down names of candidates, who pushed for the bill.

The RH bill, which the Catholic church lobbied against for about 15 years, was eventually signed into law by President Benigno Aquino III in December 2012. It requires government health centers to hand out free condoms and birth control pills, and mandates that sex education be taught in schools.

The Comelec ordered the tarpaulins removed, saying they violated the rules on election campaign materials for going over the size limit.

Explaining the SC’s decision on Wednesday, spokesman Theodore Te said, “The Comelec has no power to regulate the free expression of private citizens, who are neither candidates nor members of political parties.”

In his statement, Sarmiento said the Diocese of Bacolod considered the SC decision a victory not only for them but also for Filipinos in the fight for freedom of speech.

“It is [also] a victory for every Filipino in the fight for the protection of certain values that are fundamental in our system: separation of Church and State, and most importantly, freedom of speech and of expression, especially when the same is exercised within the confines of one’s private property, and when it deals with matters of public concern like the election of candidates into public office,” Sarmiento said.

Noting that freedom of speech is the keystone of democracy, Sarmiento said that “any regulation or order that restrains speech and expression or destroy its effective exercise should be slaughtered immediately on the altar of constitutionalism.”

“The Anti-RH Law and Team Patay tarpaulins have become the symbol of the dignity of the Bacolod Diocese,” the statement read. (READ: Diocese defies Comelec on Team Patay posters)

After being informed of SC’s decision on Wednesday, Bacolod Bishop Vicente Navarra “was in high heavens,” Sarmiento recounted.

In a text message, Navarra told Sarmiento, “From the very beginning of the issue, I was convinced that the Church was on the winning side, because it was only for the formation of conscience.”

The tarpaulins, Navarra said, were installed “for the purpose of catechizing the Catholic voters of the Bacolod Diocese, as well as the voters in general, regarding their moral and correct decision in exercising their right of suffrage as to who are the candidates they have to vote vis-a-vis the then RH bill.” – Michael Bueza/Rappler.com