Miriam: I’ll finish my term as senator in spite of cancer 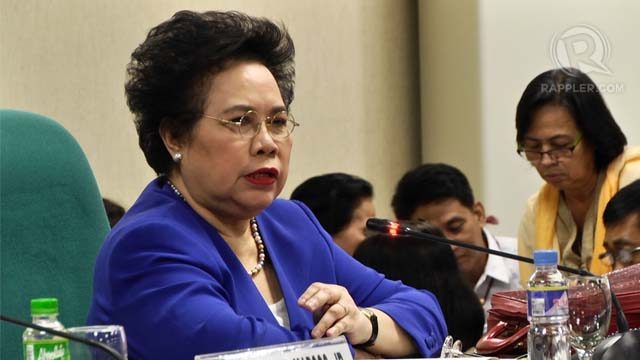 MANILA, Philippines – Senator Miriam Santiago on Friday, January 23, informed Senate President Franklin Drilon that she will complete her senatorial term until 2016 in spite of her lung cancer, but she would have to go on “qualified medical leave” to do this.

“I would like to tell you that I have decided to remain in Office until the end of my term in 2016, on condition that I shall be on qualified medical leave,” Santiago said in her letter to Drilon, copies of which were released to the media.

She said that she is updating her colleagues of her medical situation, since according to the Civil Service Commissioner,  it is the Senate which “decides on how long an official leave from office can take.”

Santiago explained: “This qualification is to allow me to discharge, on a certain priority basis, my important functions as senator, particularly as committee chair, for as long as I am allowed to do so by my condition. In 2014, notwithstanding my illness, was able to achieve certain official duties, as identified in the enclosed list.”

In ending her letter, which was the same letter she sent to all other senators, Santiago said, “I hope you will have no objection to my work plan.”

She also said she also plans to go to the US this year to get a second opinion or further treatment.

The senator said that despite her condition, she managed to file 118 bills and 264 resolutions for first reading in 2014.

Santiago announced in July 2014 that she had stage 4 lung cancer, but she was advised that she could still work despite her illness. – Carmela Fonbuena/Rappler.com