Jan 24, 2015 11:45 PM PHT
Facebook Twitter Copy URL
Copied
Ambassador Paynor says the Pope did not wear any bullet-proof vest inside his garment. Instead, what he wore was a poncho for rain protection. 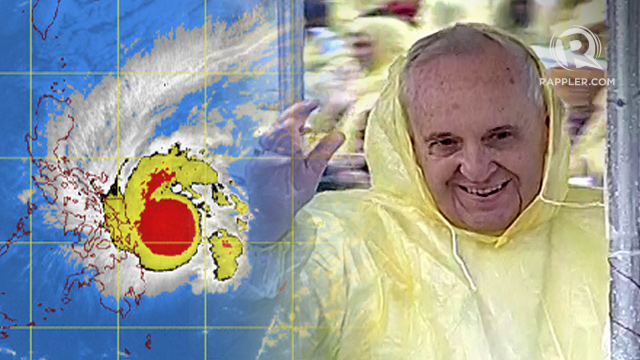 MANILA, Philippines – In the end, it was not a terrorist threat or any plot on the life of Pope Francis that gave intelligence and security officials the biggest headache.

Ambassador Marciano Paynor Jr, director-general of the National Organizing Committee for the Papal Visit, told Rappler that the “most serious and real threat” to the Pope’s safety was Tropical Storm Amang (international name Mekkhala).

“If you ask me what was the most serious and real threat, that would be the typhoon. If we had been delayed by 20 minutes, we would have been hit by the strong crosswind that affected the Global Express Jet,” Paynor said.

He was referring to the aircraft carrying 15 passengers, including Executive Secretary Paquito Ochoa Jr, which skidded off the Tacloban airport runway as it prepared to take off after the Pope’s visit to the province.

The plane swerved after it got caught in the crosswind brought by Amang. All passengers were safe but some crewmembers required medical treatment.

“No one can control the weather. It is unpredictable. Not even a veteran pilot would dare fly if the situation is too risky,” Paynor said.

On Friday morning, January 16, the state weather bureau said the tropical storm had slowed down, but it raised Storm Signal No. 1 in Luzon and the Visayas, including Leyte.

By Saturday morning, Storm Signal No. 2 had been raised in Leyte and Samar.

At a press conference Friday evening, Vatican spokesperson Fr Federico Lombardi announced that the Pope would push through with his trip despite the worsening weather condition.

Behind the scenes, Vatican and local security officials consulted each other on whether to proceed to Leyte Saturday morning. The Leyte visit was the centerpiece of the Pope’s 5-day diplomatic and pastoral mercy trip.

Was there a remote possibility that the trip would have been cancelled?

Hours before the flight, it was still uncertain if it would push through. “The schedule could change depending on the weather situation,” Paynor said.

Late in the night, Paynor said they were asked by Vatican officials “if we are prepared to leave earlier than scheduled.”

“Of course, we said yes, we are prepared,” he said.

But it was impressed upon the Pope that his Leyte trip would have to be cut short to avoid the approaching tropical storm.

Thus, the papal entourage left Villamor Airbase and arrived in Tacloban airport an hour earlier than scheduled, with the weather already getting worse.

Paynor said he is humbled by the fact that the Pope respected the technical competence and advice of the experts. “He would have followed a recommendation not to push through with the Leyte trip if the situation called for it,” Paynor said.

Such respect for the advice of authorities was evident when the Pope stuck with the schedule to leave by 1 pm, clipping his visit by 3 hours. The Pope profusely apologized to the faithful in Palo, Leyte, for his abbreviated visit.

The papal trip was a security nightmare for Philippine authorities, with around 37,000 military and police troops activated to assure his safety.

Hours before he arrived, Palace officials downplayed any actual threats, and said there were only generic threats.

One published report however said that the al-Qaeda-linked terrorist group Jemaah Islamiyah had plotted an attack on the pontiff, prompting officials to ask telecommunications companies to disrupt cell signals where the Pope would make his rounds.

Paynor said all they received were general threats, “nothing specific.”

He refused to elaborate whether the telcos got advance information that required them to jam the airwaves in places where the Pope would go.

He said security officials act on tips and information “on the day these were received.”

On the level of threat, Paynor however said it “was very serious enough for us to inconvenience hundreds of thousands of people.” People as far as Cavite complained that their cell signals were off most of the time during the papal visit.

All security information was shared with the Vatican officials, particularly the chief of the papal security, Domenico Giani. “Security decisions were conveyed to the Vatican from Day One,” Paynor said.

Apart from the uniformed cops, Paynor said there were plainclothes policemen deployed along streets and roads where the papal motorcade would pass through. It was a conscious effort to lessen the visibility of policemen, as Giani had suggested.

“Giani relayed that the Pope would not want too much restrictions in his visit and his interaction with the people. We tried to resolve that in different ways.”

He explained to Giani that the metal barriers along the papal route were necessary to prevent a stampede and people trampling on each other.

Also factored in was the pontiff’s penchant to make abrupt stops in his motorcade. At this point, “the threat becomes greater since he is stationary,” Paynor said.  The decision was to maintain a 60-kilometer-per-hour speed for the papal convoy and make any stopover as quick as possible.

The Pope, he said, did not wear any bullet-proof vest inside his garment. Instead, what he wore was a poncho for rain protection.

All throughout the papal visit, Paynor said they were all running on high-octane. It was only on Monday morning, January 19, after the plane took off from Villamor Airbase en route to Rome that he was able to finally relax.

“I felt really relieved,” Paynor said, adding that the only thing that they were not able to protect the Pope from was the incessant rains. “I can say we did everything we could, except that he got wet.”

But then, it didn’t matter as far as the Pope was concerned. “The Pope said if the people are wet, then I will also be wet,” Paynor said, quoting the Philippines’ VIP guest for 5 days. – Rappler.com