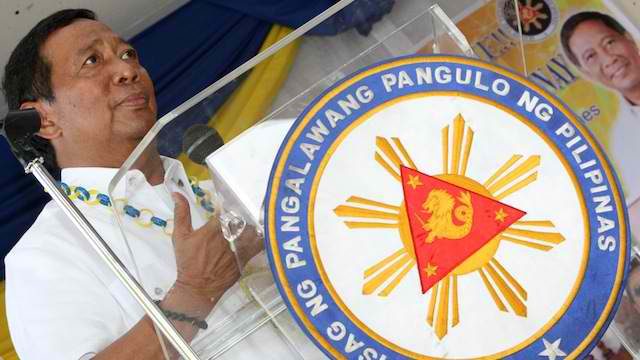 Facebook Twitter Copy URL
Copied
'Peace must be achieved within the framework of our Constitution and national sovereignty,' says the Vice President, echoing lawmakers who have questioned the proposed Bangsamoro law

On Sunday, at least 44 members of the Philippine National Police-Special Action Force (PNP-SAF) died during an operation targeting two “high value targets,” one of them alleged Malaysian bomb maker Zulkifli bin Hir, better known as “Marwan.” Twelve commandos were injured while the rest were accounted for.

“For the Vice President, this unfortunate incident underscores the very sensitive nature of the on-going efforts to achieve peace in Mindanao,” Binay’s spokesman Joey Salgado said in a statement.

The proposed Bangsamoro Basic Law, which will give extensive powers to the new regional government, is pending before both houses of Congress.

The Maguindanao clash has prompted two senators to withdraw as co-authors of the bill. Before that, some lawmakers had questioned the constitutionality of the proposed territory and powers to be given the autonomous region.

Binay, in the Tuesday statement, thus cited “the importance of proceeding with utmost caution, cognizant that peace must be achieved within the framework of our Constitution and national sovereignty.”

Salgado added the death of the SAF commandos hit Binay close to home, since 6 of those dead were members of his fraternity, Alpha Phi Omega. – Bea Cupin/Rappler.com