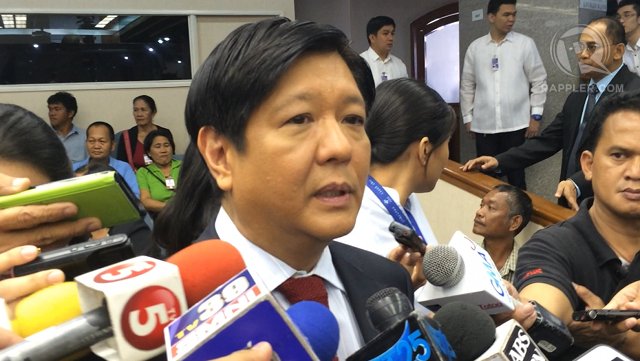 The head of the Senate local government committee tackling the Bangsamoro Basic Law (BBL) said he has been unable to talk to key players in the peace process to find out what happened in Maguindanao, and how to handle the measure in the aftermath of the incident.

Marcos said he was only able to get in touch with Chief Peace Adviser Teresita Quintos “Ging” Deles on Monday, but has since not reached her. He also asked Executive Secretary Paquito Ochoa Jr for information on the clash but the official did not get back to him.

The son of the late dictator Ferdinand Marcos said that the officials’ silence is counterproductive to the peace process.

“I want to ask them: how do we move forward from here and what is your view? What are you really thinking? What advice can you give us so we can now improve on the BBL and ensure this does not happen again?”

Marcos said he will not order the resumption of the Senate hearings into the BBL until officials shed light on what really happened in Maguindanao.

“The hearings are suspended until I am satisfied that we have all the facts,” he said. “We cannot move forward until we know the absolute truth.”

‘Many questions’ for Senate probe

The Senate will begin its probe into the Maguindanao clash on February 4 under the public order committee of Senator Grace Poe. Poe and Senators Vicente “Tito” Sotto III, Jinggoy Estrada, Teofisto “TG” Guingona III, and Joseph Victor “JV” Ejercito filed resolutions calling for a probe into the incident.

This early, Senator Francis Escudero said the Senate can hold an executive session, or conduct part of the inquiry behind closed doors because “some matters may be sensitive.”

While the government already created a Board of Inquiry to look into the incident, Escudero said that a congressional probe is necessary to ensure there will be “no whitewash” in the investigation.

He questioned Roxas’ decision to call the clash a “misencounter.”

“Kung tatanungin mo kahit sinong sundalong dumaan sa giyera, walang misencounter na 8 oras…na nagpuputukan hangga’t naubusan na nga ng bala ang tropa natin (If you ask any soldier who went through battle, there is no misencounter that lasts 8 hours where they are firing at each other until our troops ran out of bullets),” Marcos said.

Marcos said there are many questions the resource persons must answer, among them:

Marcos and Ejercito said the Maguindanao clash illustrated the contentious issues with the BBL such as the provisions on the police.

Ejercito, who withdrew his co-authorship of the BBL, said he has long questioned the police provisions but initially decided to give the bill a chance.

“In the hearings last year, I asked about that and [resource persons] said the PNP needs to coordinate with the Bangsamoro police to find a criminal or terrorist in the Bangsamoro area. I was not convinced because under that set-up, we are creating a state within a state,” Ejercito added.