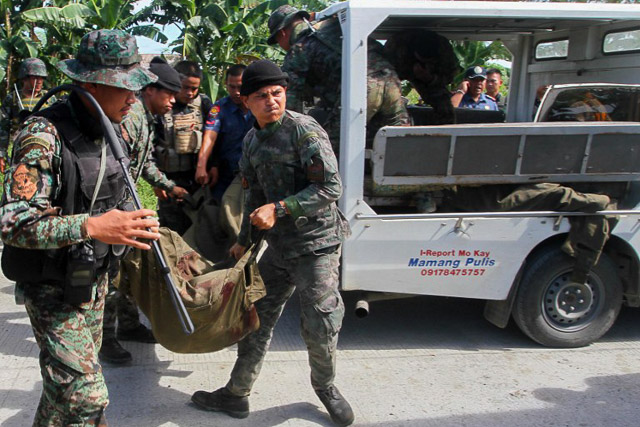 “As President and as father of this country, I am greatly saddened that our policemen had to lay down their lives for this mission. Without question, these people are heroes; they who willingly put themselves in danger to address threats to our security; they who were wounded; they who gave their lives in the name of peace,” he said in a national address detailing the incident.

“To honor those who perished, I am declaring a National Day of Mourning to symbolize the sorrow and empathy of our entire country.”

The corpses of the 44 who were slain will be brought to Manila on Thursday.

Shortly after his speech, Malacañang released Proclamation No. 953, declaring January 30, 2015 a National Day of Mourning.

On it, the President said he was proclaiming the day as such, “in solidarity with the bereaved families of the slain.”

“The entire nation is requested to offer prayers for the eternal repose of the souls of the victims and for our people to reclaim our sense of humanity,” it said.

The President also gave assurances the families left behind by the victims would be taken care of by the government.

“I assure you: the state will give you the most it can give as is according to law and policy,” he said.

He also appealed to the public to aid the families, “and assist in helping the families of the victims, as acknowledgment of the greatness of the heroes who gave their lives for the peace we hope for.”

Read the full text of the President’s speech in Filipino and English. – Rappler.com