MANILA, Philippines (UPDATED) – After snubbing 3 Senate hearings on alleged anomalous contracts in his city, Makati Mayor Jejomar Erwin Binay Jr was arrested after being cited for contempt by the Senate blue ribbon committee.

On Thursday, January 29, Senate sergeant-at-arms Jose Balajadia Jr enforced the detainment order against the son of Vice President Jejomar Binay at the Makati City Hall at past 9 am.

The mayor’s convoy left for the Senate at around 10:15 am, where the chamber was holding another hearing on the alleged corruption involving Makati city officials.

As early as 6:30 am, the mayor’s supporters started crowding the area outside the city hall.

Before proceeding to his office, Binay visited the remains of his late wife, accompanied by his children. They also attended an 8:30 am mass held inside the city hall in support of the mayor.

In an interview with reporters before heading to the Senate, Binay reiterated that he will not face the Senate despite the detainment order.

A day earlier, after more than an hour of debate, the Senate rules committee upheld the decision of the blue ribbon committee last Monday to cite Binay and 5 others in contempt, and ordered them detained.

The blue ribbon committee is leading the probe into allegations city officials, including the mayor and his father, were involved in various illegal activities.

Mayor Binay earlier said he was ready to be detained, even as he criticized what he called biased and unfair proceedings against his family.

Aside from Binay, the following were also cited in contempt:

The mayor and his father, who used to be Makati mayor for two decades, face plunder raps for alleged overpricing of a city building, the issue that triggered the probe last August 2014. 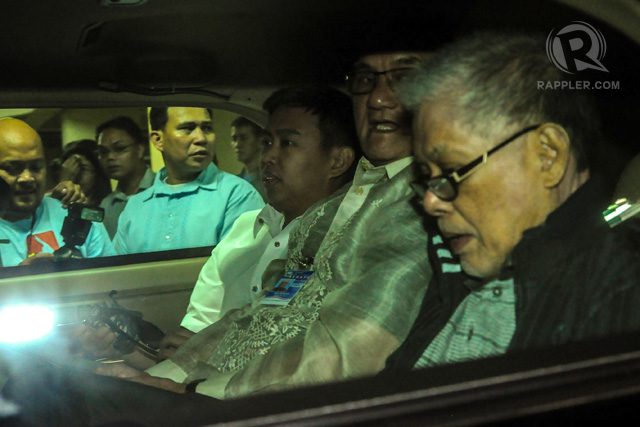 The Senate inquiry has since dug up other supposed anomalies, including allegations of rigged bids, a vast estate allegedly owned by the Binays, and kickbacks the Vice President allegedly received when he was city mayor.

The Binays have dismissed the Senate probe as their political rivals’ ploy to derail the elder Binay’s 2016 presidential bid. – Rappler.com