DAVAO CITY, Philippines – Although considered as a swampy area, the town of Mamasapano in Maguindanao offers arable land for rice and corn.

Close to 5,000 families reside in this mix of plain lands and swamps, patiently tilling the land to bring food to their tables.

Aside from the fruits of the land, the town is also rich in freshwater resources including mudfish, catfish, and prawns.

Connected to other towns through streams and rivers, being close to the Liguasan Marsh, residents often travel using dugouts – boats made from hollowed-out tree trunks.

Because of its topography, the town of Mamasapano is easily flooded during the rainy season. This has greatly affected residents most especially with the recent increase in weather disturbances in Mindanao.

Located 66 kilometers away from Cotabato City and about 1,682 kilometers from Manila, the town of Mamasapano has been deprived of many basic social services for years, worsened by decades of rule by political clans in the province.

Military sources say the complex maze of streams leading to the Liguasan Marsh and the lack of law enforcement has made the area a favorable ground for recruitment and training of rebel fighters and even a hideout for suspected terrorists.

In several instances, military sources said, rebel units easily disappeared in these areas – without leaving any trace – after launching attacks.

The hunt for Marwan and Usman

Even before the operation launched by elite commandos from the Special Action Force on January 25, in pursuit of suspected Malaysian bomber Zulkifli bin Hir, also known as Marwan, and Abdul Basit Usman, Mamasapano had been the focus of special law enforcement and military operations over the past few years. 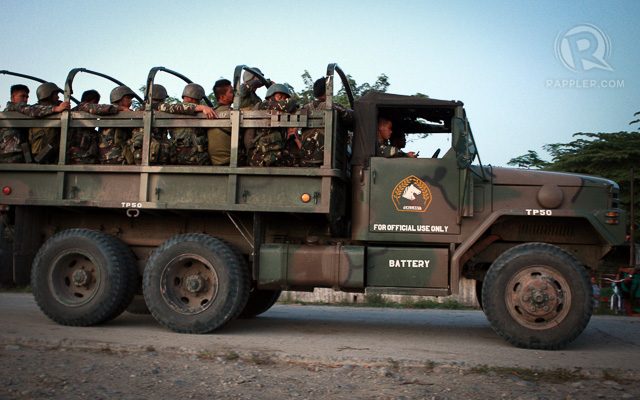 Salman, who was a P1.3 million bounty, was wounded after he tried to grab an M16 rifle from one of the arresting officers.

On June 10, 2014, an operation was launched in Barangay Libutan to capture the suspected bomber that detonated an improvised explosive device (IED) in Datu Unsay Ampatuan 4 days earlier. It killed a soldier and injured 3 others.

A firefight broke out during the operation, which began at 5:40 am and lasted for about two hours. The military reported that two suspects were killed, while 4 others were arrested.

It was later divulged that the target in the operation was Usman and that among those who were arrested was his wife. Usman was hurt but was able to escape, Hermoso said.

A few weeks after the operation, Rappler obained a cellphone video showing a hogtied man, face on the ground, surrounded by about 20 armed men believed to be soldiers. (READ: Caught on video: ‘Soldiers’ shoot man in cold blood)

They took turns hitting and kicking the man before they shot him repeatedly, emptying the magazines in their rifles. All in all, at least 50 gunshots were fired in the incident, as shown by the videe which clocked 4 minutes and 8 seconds.

The military denied the allegations, asserting that it might be an old video.

At present, the status and location of Usman’s wife and the other suspects are unknown.

The clashes in Mamasapano are not limited to government forces and rebel groups.

“This is a case of smaller units from the BIAF and the BIFM who have a family feud that was not settled,” Al Haq said.

The town has also been one of the “playgrounds” of the Ampatuan clan, which has reigned over the province for years.

In August 2013, a cache containing weapons and ammunition were dug up and recovered by the military in Barangay Manungkaling.

In December 2012, lawyer Harry Roque, private prosecutor in the Maguindanao case, disclosed that they have been informed that massacre suspect Bahnarin “Datu Ban” Ampatuan is taking shelter inside the territory of the MILF’s 106th Base Command, in a community near the Kabulnan River.

“These suspects are native inhabitants of Maguindanao and it so happened that it is an MILF-dominated area. But it would not mean that the suspects are mingling with us,” Al-Haq explained.

After the split, Kato’s former deputy commander and confidant Zakariah Goma assumed the post of 105th base commander.

“In the communities, we are friends and relatives. When we pass by each other, we embrace and wish everyone. ‘Salam.’ There are no other identities on the ground except that we are all family,” Mama said.

Mama explained that there is nothing political in the community dynamics; it is understandable for them to defend their own kin.

“I do not see it as a betrayal to their original organization. It is about protecting the welfare of your family. If someone in your family is being hurt, it is only normal for you to come and defend him regardless of your beliefs,” Mama said.

With these dynamics ruling over the town for years, the residents are already veterans in swiftly packing their belongings and fleeing to safety whenever a firefight erupts. For now, hundreds of residents are anxious, fearing that the hostilities would escalate after the botched operation in their town.

All aspects of their life are affected, including their source of food and water, education, and livelihood activities.

With reports of dead commandos falling into the river, residents now cannot even catch fish for their families.

But they will patiently wait until it is safe to go back home. – Rappler.com