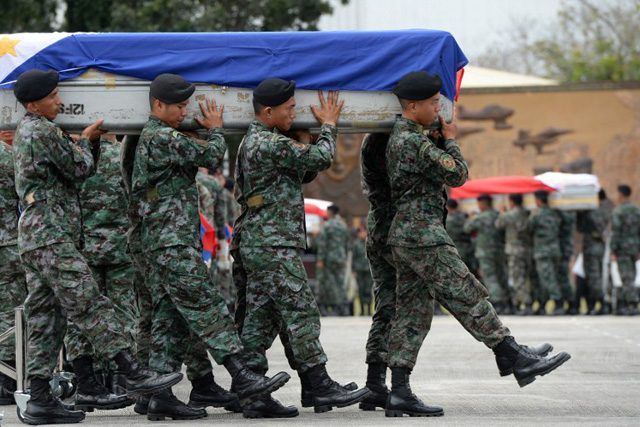 MANILA, Philippines – Instead of just conducting its own probe, the government should refer the Maguindanao clash to the International Criminal Court (ICC) for an investigation into possible war crimes.

Lawyer Harry Roque, chairperson of the Philippine Coalition for the International Criminal Court, said the group believes there is sufficient evidence to prosecute Moro rebels involved in the incident for the possible crimes of perfidy and wanton killing.

“We say it’s perfidy because they (elite cops) wouldn’t have gone there if they knew that they would be fired upon,” Roque said.

In the context of a war crime, perfidy refers to an act of deception, such as feigning surrender with the intention of taking advantage of the situation when the enemy lets its guard down.

Referring the case to an international court would guarantee an independent outcome, Roque said.

“If a prosecutor says there’s no war crime, then I think people can readily accept that rather than [Interior and Local Government Secretary] Mar Roxas saying there was a misencounter, which is the conclusion before an investigation was done,” Roque said.

Victims can have access to a reparations fund under the ICC – a mechanism that is not available in our current justice system.

The ICC can also provide the financing for the prosecution of the case, Roque said.

The mission was to arrest alleged Malaysian bomb maker Zulkifli Abdhir or “Marwan.”

Should  the government decide to take this route, this would be the Philippines’ first referral to the ICC since becoming a member of the body.

Roque said the ICC route might well be the best way to proceed with the peace process.

“In fact, I think it’s the only way we can continue with the peace pact right now. I think the emotion of the nation is to suspend peace talks right now because of the incident, but if we can convince people that there is an objective third party that will, in fact, prosecute if there is sufficient evidence, then the peace pact may be acceptable to the public,” Roque said.

The International Monitoring Team (IMT), supported by the joint government-MILF Coordinating Committee on the Cessation of Hostilities (CCCH), is conducting an independent probe into the matter. The IMT is tasked to monitor the ceasefire agreement between the two parties.

But Roque said he believes the IMT probe is not enough at this point because there could be a possible war crime involved.

The government convened a Board of Inquiry following the clash, which Roxas has called a “misencounter.”