SAF 44: The women they left behind MANILA, Philippines – She wore a black baseball cap during the necrological service. On it, embroidered in white thread, read: PNP-SAF Bomb Squad.

It was a little too big, clearly not hers, but she donned it, with pride. It slightly covered her face, her eyes that were red and puffy from crying.

“I saw it among his things that they returned to me,” she said. “So I put it on.”

Christine Kiangan lost her husband, PO2 Noble Sungay Kiangan, on Sunday, January 25. He was one of the 44 Philippine National Police (PNP) Special Action Force (SAF) troopers who were killed in a bloody clash with Muslim rebels during a SAF operation to capture two top terrorists.

On Friday, January 30, his body lay in a coffin, draped with a Philippine flag, one of 41 remains that were honored in a necrological service for the fallen. He leaves behind Christine and their only child.

Christine said her only concern is their child, whom she has tried to shield from the tragedy.

“My priority is my child, to secure my child’s future. Never mind me,” she said, before adding, “I will make it. I will make it.”

And then she began to cry.

When President Benigno Aquino III approached the coffin of Rachel’s husband, she paid little mind and kept her back turned on the Chief Executive, visibly upset. She barely acknowledged him when he gently tapped her back as he prepared to give her a medal of valor for John Lloyd’s service.

Rachel narrated how she expressed doubt to her husband about the danger involved. He assured her “nothing bad will happen.”

Rachel said her husband wanted to die this way – in combat. “He would always tell me, he didn’t want to die a regular death. He wanted to die fighting,” she said.

“[When my child is born], I will tell him his father died a hero.”

On Sunday, January 25, some 392 SAF commandos entered Mamasapano town in Maguindanao, a known bailiwick of the Moro Islamic Liberation Front. They were targeting two “high value targets,” one of them alleged Malaysian bomb maker Zulkifli bin Hir, better known as “Marwan,” who they successfully killed. The other, Abdul Basit Usman, escaped. (READ: Dead or alive? Top terrorist was cops’ target) 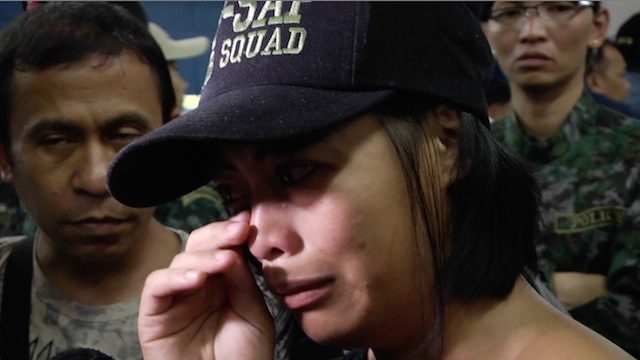 But to Anastasia Capinding, mother of fallen PO1 Loreto Guyab Capinding, there is no explanation.

“My son was obedient, well-behaved. Wherever he would go, he was good. He was an obedient son and obedient at work, that is how kind he was,” she said. “Every time he would come home, his father would say, ‘Child, why don’t you just ask them to deploy you here because it’s so messy [in Mindanao]?”

She added, “Now that this has happened, that my child is dead, I cannot believe that the people [in Mindanao] are good.”

Anastasia described the way her son’s corpse looked when they first received him a day before.

“The crown of his head was gone, crushed. His face – I can’t explain what he looked like. His body was whole but the only things I could recognize were his nails, his feet, his fingers. I know them because I am his mother,” she said.

“I tried to find a mark (in his arm) but it was gone. He looked different, like plastic, like a mannequin.”

Lawmakers have withdrawn support for the bill following the incident, but Aquino and his administration continue to push for its passage.

At the service on Friday, he also vowed to the families of the fallen that justice would be served.

“We do not want a repeat of incidents like this. As President, even if I want to be angry, I cannot allow myself to be carried away by my emotions. Rash decision-making has no place in these situations,” he said.

“If I were to let my anger dictate my actions, then perhaps instead of resolving the problem, I would only exacerbate it. We will do our utmost to gain justice for all those who perished and for the loved ones they left behind.” But his words did little to appease wives-turned-widows, mothers made childless.

“I am speechless because I feel like this will be forgotten,” Rachel said. “With the sheer amount of problems the government has, I don’t know if this will be prioritized.”

She also expressed anger at Aquino, who as Chief Executive, she said, “neglected his constituents,” and at the rebels, who she said deserve to die for what they did to her husband.

Asked what she thought of Aquino’s speech, Anastasia only shook her head.

“For me, it’s hard to say. Our only hope is that the people responsible for this will be held accountable because our sons died defending our country,” she said.

Then as quickly as she erupted, she calmed down, after a nurse gave her a pill.