Feb 1, 2015 3:45 PM PHT
Bea Cupin
Facebook Twitter Copy URL
Copied
'This country is not worth dying for if our government cannot protect its warriors. We also need the government’s protection.' 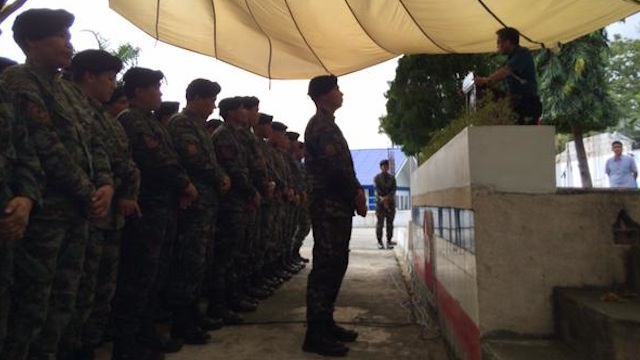 But at least one young officer could barely manage to sing the anthem of the country he has sworn to protect.

Melloria was asking why government was unable to send reinforcements.

Some 392 troopers from the SAF were in an operation to neutralize two “high value” targets, bomb maker Zulkifli Abdhir, better known as “Marwan,” and another terrorist, Abdul Basit Usman. Marwan is among the US’ most wanted in Southeast Asia, supposedly also a bomb-making teacher and seller.

Troopers were reportedly able to kill Marwan, but it came at a price.

The 44, young men in their 20s and 30s, died in an hours-long battle against Muslim rebel forces. 42 of them were flown in to Manila late last week for arrival honors and a necrological service.

One of those who died, Eraña, was Melloria’s classmate in the Philippine National Police Academy. Eraña, the class baron, was one of 7 officers who died in Mamasapano.

Troopers caught in the firefight asked for help Sunday morning, but reinforcement was unable to enter the area until early afternoon. (READ: Inside story: SAF kept military out of the loop)

Military forces based in the area were also unable to enter since cops called for help too late. (READ: PNP SAF commander: Was it worth it?)

Emotions ran high at the police camp as troopers took turns asking Roxas questions: What was the Board of Inquiry for and how can the government assure them the investigation won’t be whitewashed?

Roxas assured them the probe would be transparent and thorough, adding that he has questions himself. “Nagulat na lang kami (We were surprised),” said Roxas, narrating the events of January 25.

Espina, in previous interviews, said he only knew about the operation past 5 am January 25, or hours after SAF troopers began the operation. Roxas found out much later, he told troopers on Sunday.

Although government is still conducting its probe into the botched police operation, it is clear that the trouble began after Marwan was killed, during the troops’ extraction. Rebel fighters allegedly assaulted troopers from the 5th battalion, the blockade of the operation. Nearly all of the men in the blockade died.

Another SAF trooper who also spoke during the Sunday gathering questioned why the incident was labeled as a “misencounter.” A police official earlier told Rappler SAF troops were “hurt” by government’s use of the term.

Roxas admitted he used the term himself but added he only did so since information was scarce at the time. He also assured the SAF that none of the government’s officials think the operation was executed for the US$5 million on Marwan’s head, calling those comments “misinformed opinions.”

(Without a doubt, the SAF — our troopers, all those on the field, especially the 44 who died and the 16 who were wounded — fulfilled their duty with utmost bravery and courage, with utmost professionalism, competence, with utmost dedication and loyalty to the unit, to the flag.) – Rappler.com