In GenSan, a tearful last reunion for slain SAF officer It was his last.

The 31-year old Pabalinas was slain in a bloody gunbattle in Mamasapano, Maguindanao that left 44 members of the elite Special Action Forces of the Philippine National Police dead.

His superior said the frantic voice of Pabalinas was the last he heard before the dreaded complete radio silence dawned upon him that members of the commando platoon that the slain official led were all dead.

“After the battle, I realized that that voice will never be heard again. And I know that voice belonged to Ryan, or Senior Inspector Ryan Pabalinas,” Supt. Noli Taliño said, his voice cracking, during the eulogy for the slain PNP SAF men at the Villamor Airbase in Manila.

Pabalinas is the son of retired Chief Inspector Nelson Pabalinas, who was a member of the General Santos City Police Office.

He graduated from the Philippine National Police Academy in 2006 and was due for promotion before he met his violent death. He got his promotion – posthumously – however – as Police Chief Inspector.

Ryan’s first assignment was at the Police Regional Office 12 Rapid Deployment Battalion before he was transferred to the Butuan City-based SAF Mindanao Battalion.

He was a decorated police officer even before he got his posthumous Medalya ng Katapangan (Medal of Valor) – the highest honor bestowed on a policeman. He was also a veteran of the 2013 Zamboanga siege.

A senior police officer who requested anonymity said Pabalinas led the blocking force that sustained the most casualties – 35 dead with only one survivor.

Based on the accounts by Mindanews‘ Froilan Gallardo, Pabalinas’ unit was pinned down along a river bank in the village of Tukanalipao in Mamasapano.

Despite being outnumbered, the Pabalinas and his men put up a fight until they ran out of ammunition.

They cried for reinforcements that never came.

By mid-morning, they were left for the picking by their adversaries who were armed with locally-made version of the powerful .50 caliber Barret sniper rifle.

In an open field and in broad daylight, they were sitting ducks.

It was 11 am when Taliño said he heard the last from Pabalinas and his men.

In the aftermath, Pabalinas and 35 of his men lay dead, divested of their armor, uniforms, firearms and personal belongings. 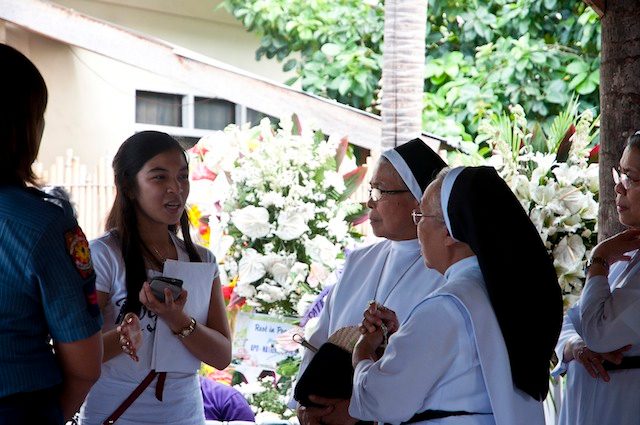 The widow of Pabalinas, Erica, was the brave woman who demanded justice in front of President Benigno Aquino III in Camp Crame.

At the wake at the GSCPO compound inside Camp Lira, Erica expressed her disappointed with President Aquino.

She however declined to further give an interview saying she still has to absorb everything and learn to accept her husband is now gone.

“It is what it is,” referring to the short but scathing indictment she delivered a day earlier before accompanying her husband’s remains.

Erica, who is from Zamboanga City, is left with their daughter Camille Ryean.

Pabalinas’ father said that as a police officer himself he knew his son died a gallant death, but said he is still demanding justice.

On Monday, February 2, it seemed Ryan wanted to stay longer in the place where grew up.

The C-130 military plane that was supposed to bring his body to Zamboanga City developed trouble with one of its 4 engines. It finally took off 4 hours after its scheduled departure.

Ryan will finally go to where he will have his final rest. – Rappler.com