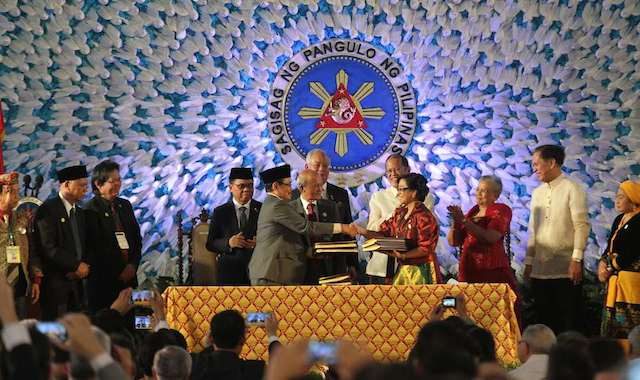 COTABATO, Philippines – The governor of the Autonomous Region in Muslim Mindanao (ARMM) urged Moro Islamic Liberation Front chief Murad Ebrahim to order his forces to return the weapons, mobile phones and other belongings that they took from slain police commandos during the January 25 clash in Mamasapano, Maguindanao.

This is to show sincerity in the ongoing peace process, Governor Mujiv Hataman told a press conference early Wednesday, February, 4, before leaving for Mamasapano to check on the situation there.

He said weapons confiscated by the MILF’s breakaway group, the Bangsamoro Islamic Freedom Fighters (BIFF), are out of the question since they’re not part of the peace agreement with the Aquino government. The BIFF was also involved in the Mamasapano clash.

“We tried to piece together the information and the stories together as to how the encounter unfolded and ended,” he added. “We have at least a picture as to what happened but I will not make it public. Instead we will submit it to Congress if the legislative body so desires,” Hataman added. (READ: Inside Mamasapano: When the bullets ran out)

The MILF’s 105th Base Command has kept mum on whether its troops indeed recovered firearms from the elite cops. The BIFF earlier said it seized at least 10 assault rifles from the incident.

On January 25, 44 elite members of Philippine National Police Special Action Force were killed while 14 others were wounded when they came to Mamasapano town in Maguindanao for a “law enforcement operation” against top terrorists Zulkifli bin Hir (Marwan) and Abdul Basit Usman.

Marwan, who has a $5-million bounty from the US Federal Bureau of Investigation, was reportedly killed while Usman managed to escape.