Feb 4, 2015 10:46 AM PHT
Rappler.com
Facebook Twitter Copy URL
Copied
(UPDATED) Based on initial reports, part of the building collapsed while concrete was being poured on the upper floors, say authorities 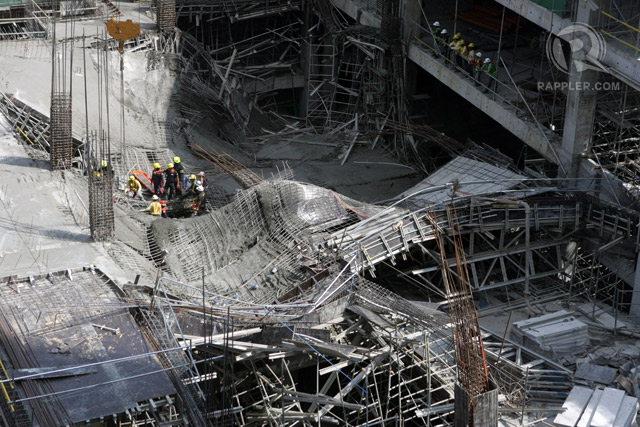 MANILA, Philippines (UPDATED) – Two people were killed and 11 others were injured after a portion of a building under construction in Taguig City collapsed on Wednesday, February 4, reports said.

Taguig City fire marshal chief Inspector Juanito Maslang said that the two workers died after being crushed by debris from the collapsed portion of The Suite building, currently under construction at the corner of 5th Avenue and 28th Street at Bonifacio Global City.

The incident occurred around 8:20 am.

Maslang said that authorities from national agencies and the city government are now on site to check for possible safety lapses and violations.

The 63-residential tower is a project of Ayala Land Premier.

It will consist of 284 residential suites and is intended to be a mixed-use development, with space for local and multinational companies, according to its project profile.

Based on initial police reports, part of the building collapsed while concrete was being poured on the upper floors.

Police are currently conducting investigations at the construction site.

The Trade Union Congress of the Philippines-Nagkaisa blamed the Department of Labor and Employment and the Taguig City government for not ensuring incidents like this would be avoided.

“This workplace incident could have been minimized and prevented if they only performed their job particularly in conducting inspections regularly before and after issuing building and construction permits,” Alan Tanjusay, spokesperson of TUCP, said in a statement.

“Government officials must ensure that building owners and contractors are aware of the rules and protocols in the construction of high-rise buildings particularly the DOLE’s Department Order 13 requirement checklist before issuing any permit,” he said.

Fort Bonifacio Development Corporation (FBDC), the developer of the real estate property, also said it is extending assistance to the families of the injured and the deceased.

The workers were employees of Fastem Construction, Inc.

FBDC added that it is coordinating with the Makati Development Corp (MDC), the principal contractor.

In a statement, FBDC head of commercial operations Manny Blas said, “We are one in grief and prayers with the families of the fatalities. We will make sure that their families receive the necessary assistance. As to the injured, every help for them to fully recover will be extended. At the same time, we are fully cooperating with authorities who are investigating the accident.” – Rappler.com