‘Purisima ordered PNP generals out of the loop’ 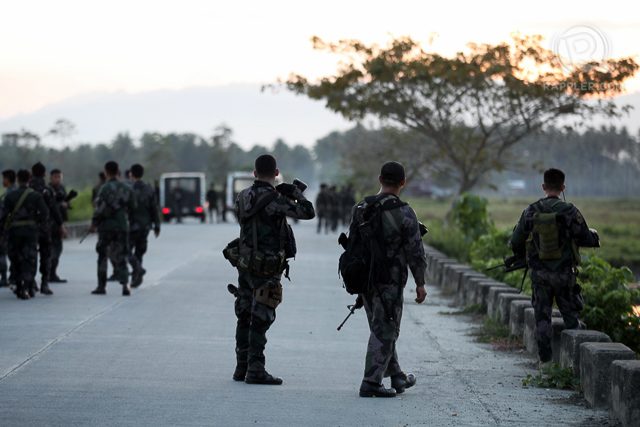 MANILA, Philippines (UPDATED) – The relieved commander of the Philippine National Police Special Action Force (SAF) said that under the orders of relieved PNP chief Director General Alan Purisima, he did not inform the police hierarchy of a high-level anti-terror operation in Mamasapano town in Maguindanao.

In a press conference at Camp Crame on Wednesday, February 4, relieved SAF commander Police Director Getulio Napeñas said Purisima told him to only inform the officer in charge the PNP, Deputy Director General Leonardo Espina, after troops had entered the area on January 25.

Espina said in a news briefing that he received a text message from Napeñas at 5:30 am on January 25 – an hour and a half after the SAF team had hit their target, and were already engaged in a firefight. The PNP OIC then asked for help from the Western Mindanao Command.

On January 25, almost 400 SAF troopers were in Mamasapano town to neutralize bomb maker and wanted terrorist  bomb maker and top terrorist Zulkifli bin Hir or “Marwan,” and Abdul Basit Usman. Forty-four of the elite cops died as a result of a bloody battle against rebels who live in the area.

Explaining why Interior Secretary Manuel Roxas II was also kept in the dark, Napeñas said he was merely “following the chain of command.” His job was to report to the PNP chief or the OIC.

He also denied speculation that he coordinated directly with President Benigno Aquino III during the operation. The President earlier said that he instructed Napeñas to coordinate with other forces – the military included – before the operation.

The relieved police general also denied the military’s statements that the PNP did not coordinate with them. It was the Armed Forces which stopped communication with the police force, he said, but clarified during the news conference his definition of “coordination.”

Responding to questions, Napeñas explained why there was no prior coordination with the military on the day of “Oplan Exodus,” a SAF operation to neutralize Marwan.

Napeñas cited previous experience with the military involving a lack of commitment, and the fear of compromising a high-level operation, as among the reasons why he only chose to inform the military about the operation – through Espina – when they were already in a firefight with rebel forces.

But the relieved police general also said the PNP had been coordinating with the military prior to the January 25 operation; the problem was, the Armed Forces of the Philippines had reportedly stopped committing to the operation against Marwan by April 2014.

In June 2014, Napenas said, the military launched its own operation against Marwan without the PNP, but failed.

The January 25 operation, Napenas said, was successful since SAF troopers were able to kill Marwan. Government officials have refused to confirm Marwan’s death until after they receive DNA confirmation but Napeñas expressed certainty that his men had accomplished their mission.

Napenas said coordinating with the military prior to the operation also put it at risk, since military movement was easily monitored in the town, a known bailiwick of rebel forces.

Coordination is only among the many issues and controversies surrounding the Mamasapano operation. The chain of command for the ill-fated operation remains hazy, as too many government officials including Interior Secretary Manuel Roxas II and the PNP OIC were kept in the dark.

According to Rappler sources and news reports, it was relieved PNP chief Director General Alan Purisima who called the shots that day. Purisima had yet to answer the allegations.

Napeñas’ statements aren’t too surprising. Earlier, Rappler reported that one of the possible reasons why police officials kept the military out of the January 25 operation is their long-running frustration over what they viewed as the military’s inaction against Marwan.

The Philippines is at the tail end of a deal that seeks to establish a new autonomous region in Muslim Mindanao and end decades of armed conflict in the area. – Rappler.com