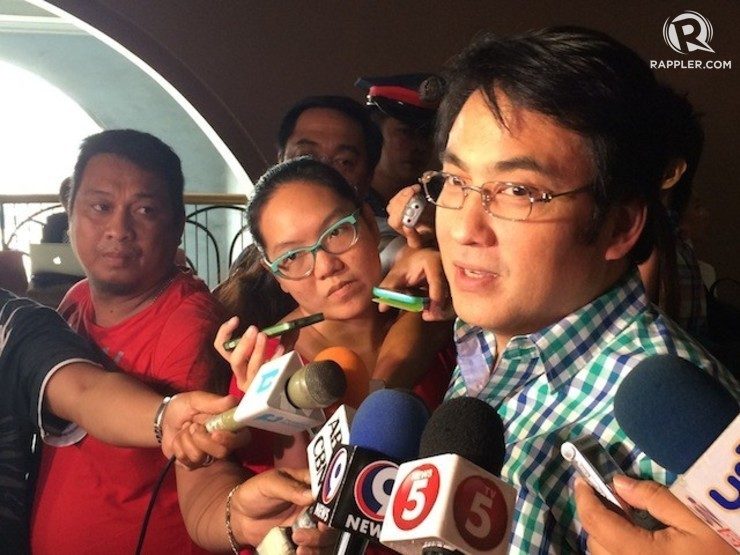 Facebook Twitter Copy URL
Copied
(UPDATED) The P224.512M that the senator allegedly pocketed from his development fund will be held until his plunder case is resolved. He expresses disappointment over the 'seeming haste' in the decision.

MANILA, Philippines (UPDATED) – The anti-graft court Sandiganbayan has ordered the garnishment of Senator Ramon Revilla Jr’s assets totaling P224.512 million (around $5 million) in connection with his plunder case over the pork barrel scam.

The Sandiganbayan issued the writ of preliminary attachment or garnishment at the close of office hours Thursday, February 5.

In a statement sent to the media Friday, February 6, Revilla said he was “disappointed” over the “seeming haste” of the court to freeze his assets.

Last October 27, prosecutors with the Office of the Ombudsman filed an ex-parte motion for the temporary seizure of Revilla’s assets that were allegedly acquired illegally through the pork barrel scam.

The writ covers 44 bank accounts and investments, excluding those already closed by Revilla when news on the PDAF scam broke out, 28 real properties, 15 motor vehicles, 5 separate shares of stock totaling P1.14 million in 3 different corporations, and shares in 12 other exclusive sports clubs and private companies.

The assets will be under the court’s custody until a decision is made on his plunder case – to avoid the dissipation of the senator’s assets in case the government wins the case and has to collect the funds.

“You are hereby ordered to secure and attach the properties of accused Ramon ‘Bong’ Revilla Jr. attach so much of the property in the Philippines of the said accused, not exempt from execution, as may be sufficient to satisfy the applicant’s demand in an amount not exceeding P224,512,500 in value,” the court said in a two-page writ signed by lawyer Estela Teresita Rosete, executive clerk of court of the Sandiganbayan First Division.

A writ of attachment has the effect of a freeze order on specified properties. It is meant to prevent the defendant, his relatives, or his agents from selling, transferring, or disposing the assets.

Revilla is facing plunder and 16 graft cases over allegedly pocketing P224 million from his Priority Development Assistance Fund, and misusing a total of P517 million ($11.5 million) in PDAF, respectively. His cases are being heard by the Sandiganbayan First Division.

The Anti-Money Laundering Council earlier found indications of money laundering in the accounts of Revilla and his family members.

On Thursday, the Ombudsman also asked another division of the Sandiganbayan to confiscate the allegedly ill-gotten wealth of another senator, Jinggoy Estrada. He is also facing plunder charges for pocketing P184 million from his pork barrel.

In a statement released Friday, Revilla hit the court for acting in “haste.” He questioned the basis of the writ as the court has yet to decide on his appeal for the reconsideration of the denial of his bail plea.

“In its resolution of the motion to garnish my properties, the court cited as basis the denial of my motion for bail, which in truth is still under reconsideration and has yet to attain finality,” Revilla said.

Revilla said “almost all” of the properties that were ordered frozen were acquired before he became a senator.

Revilla is a known movie and television actor before he entered politics. – Rappler.com