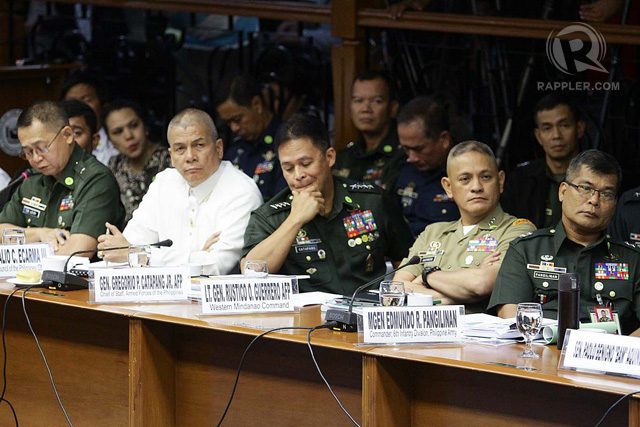 MANILA, Philippines – Up to the last minute and after the military had established a ceasefire in Mamasapano on January 25, the military did not know about a second team of US-trained police Special Action Force (SAF) Seaborne unit that was also trapped inside Mamasapano.

“At 5:15 pm, the PNP SAF reported that the main effort was still subjected to intense volume of fire. It was the first time that 6th Infantry Division and the CCCH learned that there is another engaged group which constitutes the 84th SAF,” Armed Forces of the Philippines deputy chief of staff for operations Lieutenant General Angelito De Leon disclosed at a Senate hearing on Monday, February 9.

Napeñas later sought for artillery support. The military only fired white phosphorous because of the dange of friendly fire.

At 5:30 pm, the military sent troops to extract the survivors. It was 11:30 pm when the Army linked up with the survivors of the 84th SAF company. They lost a total of 9 comrades.

The 55th SAF company was supposed to serve as the blocking force that would assist the the 84th SAF company in leaving the site. The two SAF groups failed to link up.

The SAF sought military reinforcement as early as 6am for the 55th SAF company trapped in the cornfields in Mamasapano in the early hours of Sunday. Only one of the 36 elite cops survived.

The commander of the 6th ID, General Edmundo Pangilinan, apparently withheld fire support until the details of the firefight were complete.

Sacked SAF commander Getulio Napeñas maintained that his men would have survived if reinforcements only came.

The PNP SAF kept the January 25 operations a secret from the military in spite of what President Beningo Aquino II claimed were clear orders for a well-coordinated operation. The military maintained that the lack of proper coordination prevented them from preparing possible contigency plans to assist the SAF.

Napeñas said utmost secrecy had to be kept to avoid a repeat of former operations where he hinted that Marwan was tipped off.

It was around 5 am on January 25, an hour after Marwan was neutralized, that Napeñas informed military officers that they had law enforcement operations against “high value targets.” He did not name targets.

After the tragedy, the PNP would later reveal that up to 392 elite cops were deployed for the secretive mission but only two teams of about 70 were engaged in a firefight.

The third group of SAF commandos was in the highway, unable to reinforce their comrades.  – Rappler.com