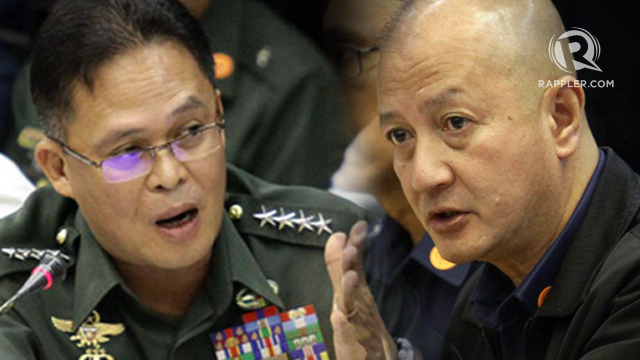 The heads of the Philippine National Police (PNP) and the Armed Forces of the Philippines (AFP) gave different answers to senators investigating the deadly January 25 encounter that sparked a blame-game, and renewed rivalry between the two uniformed forces.

“It’s not true that we coddled Marwan and Usman. They are not stationary,” Ladiasan told Recto.

AFP not sure about MILF-Marwan ties

Recto earlier asked Catapang the same questions, but the AFP chief was more guarded in his response.

The military general said that when troops hunted down Marwan and Usman, the bomb makers were “accommodated” in the place of the BIFF. Catapang said, in exchange, the terrorists gave BIFF training in bomb making and terrorist activities.

Catapang said, “We are receiving information, but we are not sure.”

In the first hearing on Monday, Catapang said the AFP considered the peace process in responding to the SAF’s requests for reinforcements. Police officers lamented that the military was slow to respond to its requests for back-up.

Iqbal said on January 31, “I do not want to sound philosophical, but you cannot turn over something that is not in your possession.” – Rappler.com