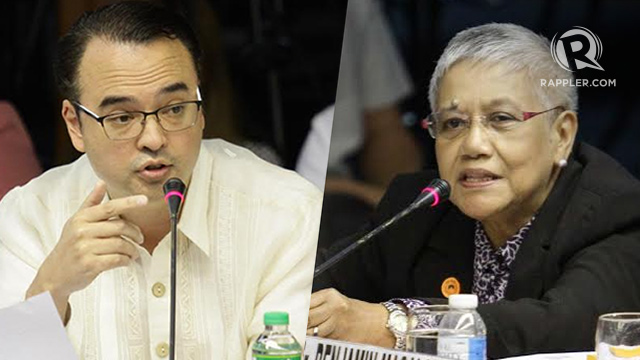 MANILA, Philippines – “We are in trouble because our peace negotiators don’t even know we cannot negotiate with terrorists.”

In a Senate hearing on Tuesday, February 10, Cayetano showed a Powerpoint presentation citing books of terrorism experts and articles of Rappler Executive Editor Maria Ressa on the rebel group’s ties with Al Qaeda, Jemaah Islamiyah, and the Abu Sayyaf Group.

Presidential Adviser on the Peace Process Teresita Quintos Deles took exception to Cayetano’s statements, and passionately defended the peace process that is now close to being concluded after 17 years of negotiations.

“We are not terrorists. We have been fighting terrorism in all forms,” Ladiasan said. “Chair [Hashim] Salamat and [Al Haj] Murad have well-transmitted communications denouncing all the allegations, which were translated to actual actions in the peace process. We did a lot to allow the peace process to take its course.”

“We will not sacrifice 17 years. It’s been more than 17 years since we started the peace talks. When I was born under martial law, I already experienced this conflict. I do not want to lose this opportunity,” he added.

In response, Deles requested for an executive session with the CCCH to discuss the MILF’s relationship with the BIFF but senators were not keen on holding one yet.

‘This is Republic of the Philippines’

Besides allegations of an “overkill” in Mamasapano, what made the senators question the MILF’s sincerity even more was its leadership’s decision not to attend the Senate inquiry for now, as it wraps up its own probe into the incident.

The elder Cayetano said she respected the peace process and the government negotiators but the panel must also “respect” what happened in Mamasapano.

Raising her voice, Senator Pia also commented on the MILF’s commitment to return the equipment of the slain SAF troopers.

“It took them 15 days to say they will return the government firearms? Fifteen days to return a cellphone, a wallet, a photo, which is all a mother can look at? How can we proceed this way? Is this who we are negotiating with?” – Rappler.com