MIAA: Why merging terminal fees in tickets is needed, easy The presentation was never shown, after 4 senators proceeded to grill him.

In the middle of the two-hour hearing, Honrado told the Senate panel he would not endorse the proposed suspension of the integration but would convey it to the MIAA board.

Migrant workers’ groups were dismayed by what they regarded as Honarado’s callousness.

Implemented last February 1, the integration scheme forced overseas Filipino workers (OFWs) to pay for the P550 airport terminal fee reflected in their tickets bought online and abroad, although a law exempts them from paying it. The new process lets them just reimburse the terminal fee.

The integration only covers so far passengers through the Ninoy Aquino International Airport (NAIA).

Pro-OFW advocate Susan Ople said the new scheme frighteningly lacked sensitivity to workers’ needs and to the law, a sentiment shared by at least 4 senators.

Senator Aquilino Pimentel III said he is “worried” that the disputed MIAA circular sanctioning the integration is contrary to the Migrant Workers Act of 1995, which exempts OFWs from terminal fee payment.

Senator Nancy Binay regarded it a “disservice” to OFWs. Senator Cynthia Villar called for enlightened discussion on the issue “so as not to unnecessarily inconvenience our OFWs.”

Senator Alan Peter Cayetano suggested an identification system for OFWs to be able to secure their exemption online and abroad, calling the issue a technological and not a policy problem.

The Philippines is a known labor-sending country, with OFWs’ remittances amounting to more than a 10th of the country’s national income.

But Honrado and Transportation Secretary Joseph Emilio Abaya maintain it is meant to decongest NAIA, notorious for traveler complaints and cited as among the world’s worst airports. 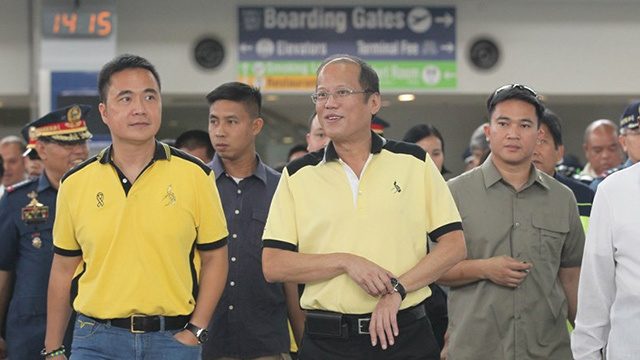 Below are some points from MIAA’s presentation about the IPSC scheme:

MIAA admitted that “negotiation attempts failed” in the past “mainly on the issue of processing exemptions mandated under Philippine Laws and compensation (service fee) to be paid to airlines for handling the collection process.”

It explained that MIAA began talks with air carriers through the Board of Airlines Representatives in 1994. This ended briefly in 1998 and resumed on 2012, until an agreement was made in 2014.

Consultations with stakeholders were likewise conducted from March until October 2014, MIAA said.

Honrado told Rappler that a simulation of the new process given the IPSC scheme was conducted with the Land Bank of the Philippines, which does the refund. It only takes a minute for an OFW to refund his or her P550, based on the simulation.

Advocates have belied this claim, saying it takes around 15 minutes, which is precious time given the short vacations OFWs are allowed to take. “All OFWs line-up at the Terminal Fee Counter prior to Immigration to have their OECs (Overseas Employment Certificates) validated by MIAA personnel,” the MIAA explained.

This means a queue already exists for OFWs upon their return. The said counter is where they present their OEC as proof they are registered migrant workers with the Philippine Overseas Employment Administration.

Once proof of overseas employment is shown, OFWs are now allowed to skip the terminal fee payment by virtue of their law-mandated exemption.

Given the new scheme, OFWs would now need to show proof of payment of the terminal fee charged in their online- and overseas-purchased tickets in addition to the OCE to claim their refund. “All laws to the contrary notwithstanding, the migrant workers shall be exempt from the payment of travel tax and airport fee upon proper showing of proof of entitlement.“

“In the ASEAN Region, it is only the Philippines where collection of IPSC is done face to face at the airport,” said MIAA.

In addition to addressing the congestion problem at the airport terminals, the scheme seeks to “add up a sizeable space in the passenger movement area with the removal of terminal fee counters.”

Labor Secretary Rosalinda Baldoz has proposed a technology assigning identification codes to each OFW for their exemption to be honored online and abroad.

The fee row might be a “blessing in disguise” if “magkakaroon ng (there will be a) card, ID number that will simplify everything,” said Cayetano.

Technology strategist John Dennis Poyotas from Microsoft Philippines said such a system is possible, but failed to provide the estimated costs of developing the technology. – Rappler.com