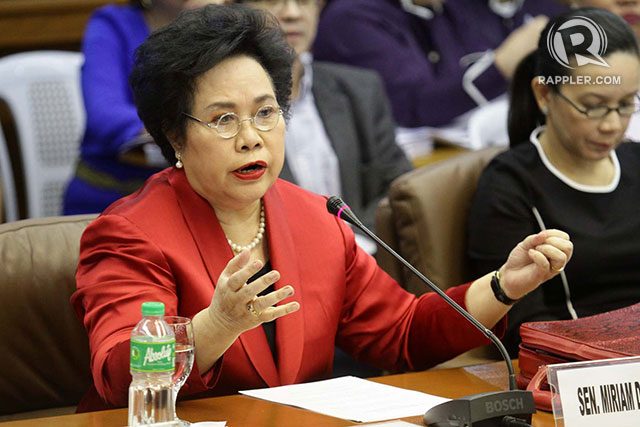 Purisima was suspended on December 4, 2014 over an allegedly anomalous deal inside Camp Crame. But on January 9, 2015, Purisima was in a meeting with then Special Action Force (SAF) commander Getulio Napeñas and other police officials to brief President Benigno Aquino III on what would eventually be “Oplan Exodus.”

Responding to Santiago’s question, the police general said that was the only time he spoke with President Aquino regarding “Oplan Exodus,” which was implemented on January 25 to arrest terrorists Zulkifli bin Hir (Marwan) and Abdul Basit Usman. The SAF operation killed Marwan, 44 elite cops, 18 Moro Islamic Liberation Front rebels, and at least 3 civilians.

“Bakit ka salita nang salita? Bakit di ka manatili sa estate mo sa Nueva Ecija. Kung di ka siguro sumali, buhay sila,” Santiago told Purisima. (Why did you involve yourself? You could have stayed in your estate in Nueva Ecija. Had you not interfered in the operation they would still be alive by now.)

Purisima insisted it was part of the SAF’s plan to coordinate “time on target,” or only when troopers were already in Mamasapano. The general also reiterated that it was not a “command” to Napeñas but “advice.”

Santiago said: “Don’t quibble with me… You were suspended and still dipping your fingers in the pie.”

The senator asked Purisima if it was the President who ordered him to keep Interior Secretary Mar Roxas and Acting PNP chief Deputy Director General Leandro Espina out of the loop. She asked if it was instead Purisima himself who told the President the same.

The general said no to both questiions. – Rappler.com