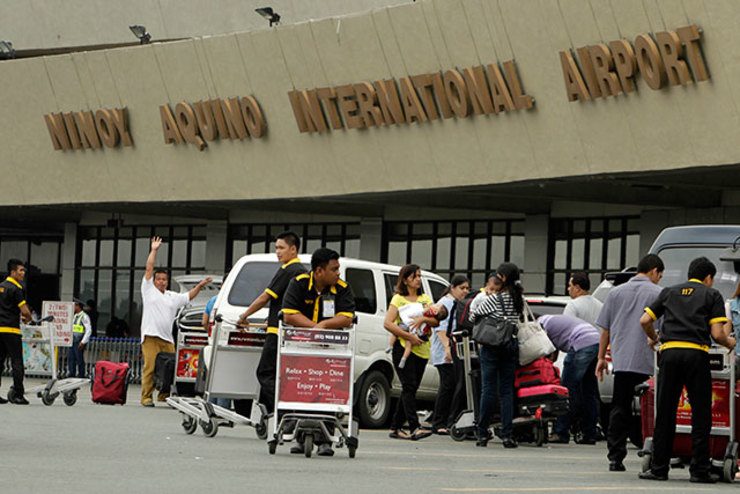 Facebook Twitter Copy URL
Copied
The terminal fee integration is 'not urgent and that there would be no loss of profit on the part of the government' if it is suspended, a Senate resolution reads

MANILA, Philippines – The Senate and a House of Representatives committee have passed resolutions urging the Manila International Airport Authority (MIAA) to temporarily stop the merging of terminal fees in airline tickets.

Groups supporting overseas Filipino workers have opposed the MIAA policy, which has been implemented since February 1. A law exempts OFWs from paying terminal fees at the airport, and this policy will make them pay for it online and abroad when they purchase their tickets, and get reimbursement later.

The Senate passed its resolution Thursday, February 12, while the House committee on overseas workers affairs passed its version Wednesday.

The Senate wants to ensure that a technology be developed first to secure the exemption of OFWs from terminal fee payment even in plane tickets bought online and abroad.

In its resolution, the Senate cited expert opinion “that it is not impossible to adopt a computer system that will allow recognition of the exemption of OFWs or the online verification of documents showing exemption of the OFWs and other locally-recognized exempt passengers.”

The House committee said the MIAA should first wait for a Pasay court ruling on the matter. (READ: Court asked to call out MIAA on airport terminal fees)

The committee, through chairman Akbayan Representative Walden Bello, will “exercise all possible legal remedies, including the filing of appropriate charges” if MIAA “will persist in its implementation.” OFWs under the amended Migrant Workers Act are exempted from paying the terminal fee or the International Passenger Service Charge (IPSC), an airport tax collected from international passengers by all airport authorities worldwide for the use of airport facilities and services.

OFWs are permitted to refund the P550 fee paid online and abroad under the new IPSC scheme, which lawmakers see as an added burden to the passengers.

The Philippines is a known labor-sending country, with OFWs’ remittances representing 13% of the national income.

No loss for the government?

In its resolution, the Senate said “it was shown that the integration of the IPSC into the payment of airline tickets is not urgent and that there would be no loss of profit on the part of the government.”

Honrado earlier told the Senate panel he would not recommend the proposed suspension of the integration but will convey it to the MIAA board.

The Senate said the MIAA lacked “earnest efforts” in coming up with “a solution allowing OFWs and other locally recognized exempt passengers to claim their exemptions, even when buying their airline tickets through online transactions or abroad.”

Labor Secretary Rosalinda Baldoz had revealed in a letter that some airlines rejected a proposed data-sharing scheme that could have solved the problem of accommodating OFWs’ exemption in online- and overseas-purchased tickets.

The new IPSC scheme so far covers only international passengers through the Ninoy Aquino International Airport (NAIA), notorious for traveler complaints and cited as among the world’s worst airports.

Transportation Secretary Joseph Emilio Abaya said the move is meant to decongest NAIA, but lawmakers in the House committee found that congestion at NAIA are not at terminal fee counters.