Feb 12, 2015 8:00 PM PHT
Bea Cupin
Facebook Twitter Copy URL
Copied
Senator Miriam Defensor Santiago points out: 'In their own admission – and this is an admission against interest which constitutes as strong evidence – there were only 4 people' in the January 9, 2015, briefing for the President 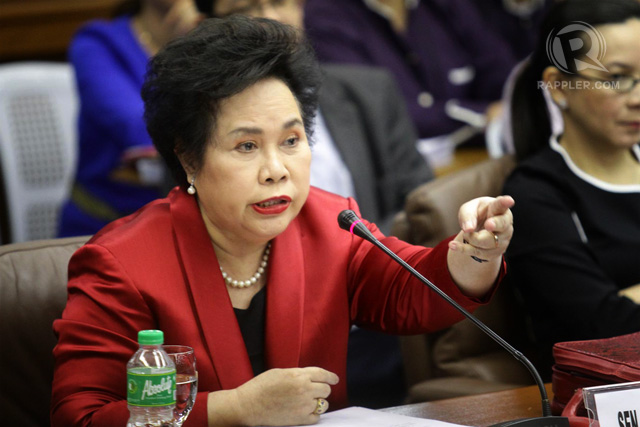 MANILA, Philippines – Not one, but 4.

Senator Miriam Defensor Santiago on Thursday, February 12, said 4 people are responsible for the death of at least 68 individuals, including 44 elite policemen, during a police operation in Mamasapano town, Maguindanao.

“In their own admission – and this is an admission against interest which constitutes as strong evidence – there were only 4 people there. So if we were made to choose [who is responsible], we only have the 4,” Santiago said in a press conference help after her interpellation of police and government officials during the Senate’s probe into “Oplan Exodus.”

“In effect all 4 must accept responsibility for the failure. In fact, not just failure but carnage. I am naming President Aquino because I don’t think it serves the public interest to fudge the issue, as if he’s some sacred cow. I don’t think he needs my protection. He can stand for himself,” said Santiago. (READ: SAF operation ‘failure’ from the start)

The senator, however, said that while she wants Aquino to take responsibility for the operation, she is against any moves to oust him through a coup. Earlier during the Senate hearing, Santiago mentioned some “rogue groups” were already meeting to oust the President.

“I am against the removal of President Aquino through any means that is unconstitutional… therefore my criticism should be taken as surgical operation to determine what should not be done again,” she added.

Santiago, a constitutional law expert and former Regional Trial Court judge, said the 3 police officials could be placed under “court martial” or sued before civilian courts.

The PNP, as a civilian organization, is not under the jurisdiction of military courts. Instead, police may be sanctioned administratively through the National Police Commission.

But for Santiago, the trouble for the 3 police officials doesn’t end there. “Under the stature of the Rome Stature of the International Criminal Court, if the official has the rank of colonel or above, including the head of state, then you can be persecuted before an international criminal court if someone files a complaint,” she added.

Aquino, meanwhile, is currently immune from suit but Santiago noted “he loses that immunity when he leaves office in 2016.”

Asked whether Aquino’s involvement could be a basis for his impeachment, the political veteran said it wasn’t a question of law but “how many votes he has in the chamber.”

Santiago also bellied Aquino’s claim in a televised address that he did not need to approve the January 25 outright since the PNP had long been pursuing Marwan. “I don’t believe that for a minute, I’m sorry,” she added. (READ: What I wish Aquino said)

During her interpellation, Santiago said she did not believe that the buck stopped with Napeñas. – Rappler.com