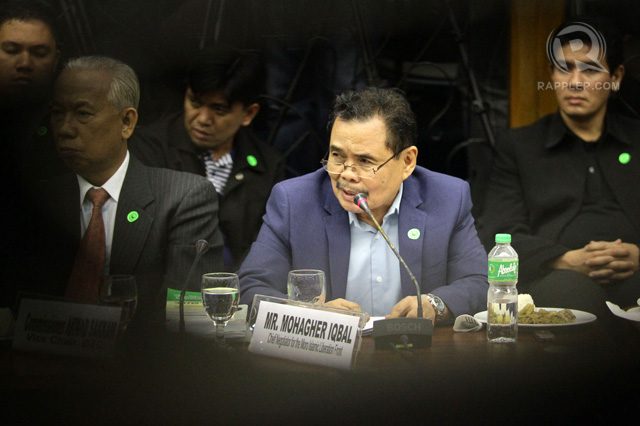 Asked why he made the gesture, Iqbal said, “We are not at war with the PNP. Right from the start the MILF’s enemy was oppression, not the Armed Forces and the PNP.”

Aquino’s close friend, Alan Purisima allegedly ran the operation even when he was suspended as police chief over corruption charges. Senators want to know if Aquino gave Purisima authority to do so.

Iqbal said the fallout from the clash was worse than any spoiler to the peace process. He admitted that the early passage of the Bangsamoro Basic Law (BBL) creating an expanded region in Muslim Mindanao by March is now unlikely. Iqbal is the chairman of the Bangsamoro Transition Commission that drafted the bill.

“It should have been passed by the first quarter of 2015. That’s why we have doubts why this incident happened now. Even if that incident is not an act of a spoiler, the consequence is worse than the act of a spoiler. The nation is wounded. There is outrage, and there is too much emotion,” Iqbal said. While Iqbal sought to appease lawmakers, he faced a lot of questions about the MILF’s involvement in the encounter, especially after the release of a video where a man was seen shooting twice in close range a police trooper still struggling for his life.

“Many died from the SAF but many also died from our side. What the families of the SAF are feeling is what they are also feeling. We are dealing with human feelings and that can’t be addressed abruptly. We talked to our combatants and it took quite long for them to decide to return the SAF firearms,” he said. “The bottomline is a watered down BBL won’t address the legitimate grievances of our people. If we accept it, we will be irrelevant, and the [Bangsamoro] problem will go on.”

Iqbal rejected the call of Senator Ferdinand Marcos Jr to find an alternative to the BBL. “At this time, we are not thinking of an option except the BBL will be pursued by Congress.”

“Ang importante ginawa namin lahat. Sa mga Muslim, importante na gawin mo lahat. Kung hindi nangyari, galing na sa itaas,” Iqbal said. (What’s important is we have done everything. For us, Muslims, what is important is to do all. If it still does not happen, then that is the signal from above.) – Rappler.com