Condoms vs chocolates in PH on Valentines Day 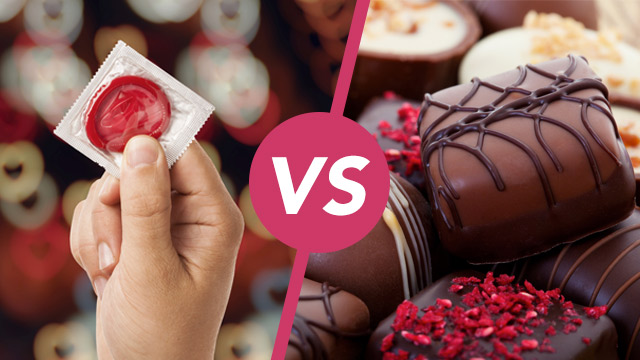 MANILA, Philippines – A condom maker in the Philippine capital Saturday, February 14, found their Valentine’s Day giveaway challenged by a church group who tried to persuade people to swap the contraceptives for chastity and chocolates.

A colorful flower market in Manila became the unlikely battleground over the use of contraception in the Catholic-dominated Southeast Asian country as the church group countered the free condoms with chocolates and sweets – complete with printed messages encouraging chastity.

“Exchange your condoms for candies, #WeKeepLoveReal,” read the signs carried by volunteers from the Christian advocacy group Filipinos for Life.

DKT Health, the country’s biggest condom manufacturer, plans to give away 40,000 condoms over the weekend, the company’s head of marketing Emmanuel Alfonso told Agence France-Presse.

The country’s Catholic Church continues to preach against contraceptives, likening its use to abortion, despite failing to block legislation to make them widely available to the poor.

In the past, the government handed out free condoms on Valentine’s Day but didn’t this year to avoid drawing the ire of the Church, health department spokesman Lyndon Lee Suy told Agence France-Presse.

But he stressed the ministry was not giving up its safe sex advocacy, especially to stop the spread of HIV/AIDS.

“Every time you do it, sex should be safe, not only during Valentine’s,” health Lee Suy said.

While men casually accepted the condoms from the DKT models in tight blue t-shirts and shorts, some bashful women handed them back and then scurried away.

But some people got both candies and condoms.

“I already ate the candies. The condoms, I can’t use it yet because I’m only 16 and I don’t have a girlfriend. Maybe I will keep it in my wallet for good luck,” college student Danny Villegas told Agence France-Presse. – Rappler.com

Photo of hand with condom from Shutterstock

Photo of assortment of chocolates from Shutterstock