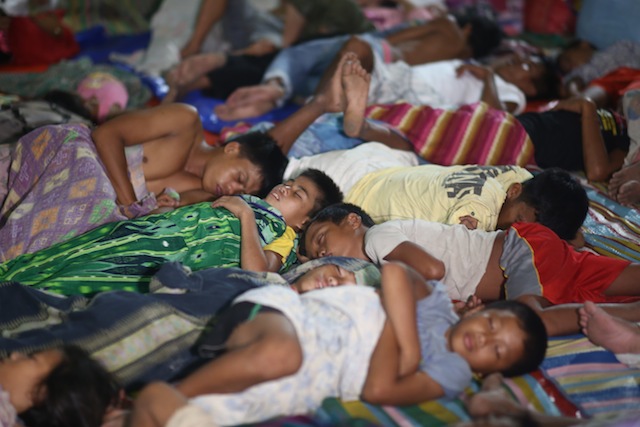 With their children, valuables and farm animals, the villagers left the interior villages of Kalbugan in Pagalungan and Buliok in Pikit Sunday night, February 15, to stay at the Pagalungan gymnasium in Barangay Poblacion and in Mahad School in Poblacion Pikit.

“Walang tigil ang putukan, pina-bakwit kami ng mga barangay kapitan,” one of the evacuees said. (The gunfight has not stopped. Our barangay captains asked us to evacuate.)

The Pagalungan gymnasium was packed with children who slept on the concrete floor covered with tarpaulin, clothes and boxes. The compound of the town hall looked like an animal ground – as it accommodated the evacuees’ carabaos, goats, cows, goats and chickens.

Captain Jo-Ann Petinglay, spokesperson for the 6th Infantry Division based in Maguindanao, said that around 5 pm on Saturday, the MILF’s Eastern Mindanao Front led by Commander Jack Abas started exchanging gun fire with the group of one Commander Gani Saligan of the BIFF.

Petinglay said both armed groups have been “staring at each other since last week.”

Petinglay said the Army will ensure the safety of civilians but will not interfere in the fighting between the Moro groups.