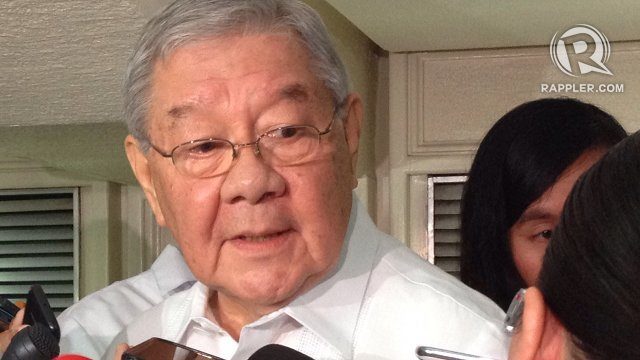 Belmonte made the announcement a day after House leaders agreed to cancel the probe scheduled for Tuesday “indefinitely” until the release of the results of the police Board of Inquiry (BOI) investigation on the deadly clash that killed 44 elite cops, 18 Moro rebels and 3 civilians.

But the House backtracked Tuesday.

Belmonte said he was informed that the BOI can only finish its probe end of February. He denied allegations that the sudden cancellation of the probe was meant as damage control for Malacañang and an attempt to cover up for the President’s involvement in the operations.

“The President does not need protecting,” Belmonte said.

In a statement, opposition United Nationalist Alliance interim president and Navotas Representative Toby Tiangco accused the administration Liberal Party faction in the House of “maneuvering” to stop the probe.

In response to Tiangco, Belmonte said: “Who still believes Tiangco to start with?”

The suspension was meant to organize the conduct of the probe, Belmonte said. During last week’s hearing, lawmakers spent more than an hour arguing about administrative matters even before the actual inquiry could start. The 8-hour hearing also ended with an argument on procedural matters.

Belmonte said House leaders made the collective decision on Monday to suspend hearings. The meeting was also attended by Minority Leader Ronnie Zamora, he added.

What can be expected in the next House hearing?

During the February 12 Senate hearing, Purisima asked senators if he could first get Aquino’s clearance to answer the question on who informed the President of what was happening in Mamasapano at the height of the clash.

Still supportive of BBL but…

Deliberations on the proposed Bangsamoro Basic Law will however remain stalled.

The Speaker said it is not the “best time” to push for a vote on the proposed law as the Mamasapano incident remains unsolved.

Congressional inquiries on the Mamasapano clash have derailed the timeline of the peace process in Mindanao amid a tight deadline. A senator said the bill is in “coma” in the aftermath of the Maguindanao clash.

Belmonte admitted that while he remains supportive of the proposed law, he is not as “enthusiastic as before.”

Asked if proponents still have numbers to pass the law in the aftermath of the Mamasapano incident, Belmonte said: “It’s not the best time to force a vote on that.”

With emotions still running high, Belmonte said he believes it is not the right time to push for the law.

Belmonte said he told ad hoc committee chairperson, Cagayan de Oro Representative Rufus Rodriguez, that the call to put the bill to a vote at committee level rests on him but the House leadership is not imposing any deadline.

“I, in fact told Rufus that this is not a good time to bring it out there. Just remember that committee is composed virtually only of congressmen from Mindanao and given the atmosphere after the incident, I don’t think they are all very enthusiastic to be very supportive of it at this stage until we know more about what happened and the circumstances and so forth,” Belmonte said.

In separate press conference Tuesday, Deputy Speaker and Isabela 4th district Representative Giorgidi Aggabao said some members of the Nationalist People’s Coalition, which is allied with the majority bloc, are “livid with outrage” on what happened in Mamasapano.

“I would say as a matter of principle I am in favor of BBL and I think I could say it without contradiction that our party is in favor of the BBL before the Mamasapano and that’s broadly speaking without going into details no, in broad strokes, we favor autonomy,” Aggabao said.

Under the peace deal, delays in the establishment of the Bangsamoro government would also delay the decommissioning of rebel firearms.