Facebook Twitter Copy URL
Copied
Senators say Mario Oreta can be held liable for money laundering, tax evasion, and fraud over money that he denies was used in the Vice President's campaign

MANILA, Philippines – “Mr. Ongpin, don’t give us this song and dance.”

Senator Sergio Osmeña III and his colleagues rejected as a “technical palusot (excuse)” the explanation of Alphaland officials on the deal between the developer and the Boy Scouts of the Philippines (BSP), from which Vice President Jejomar Binay allegedly got an estimated P250 million to P651 million in 2010 campaign funds. (READ: Did Binay use Boy Scout funds for 2010 bid?)

Senators quickly sought to discredit the explanation when Oreta said that he did not pay income tax for the so-called 5% “carried interest.” The Alphaland president said he only paid capital gains tax because he did not liquidate the shares into cash.

Yet upon Osmeña’s questioning, a representative of the Bureau of Internal Revenue (BIR) said that income tax must be declared even if the compensation is not in the form of cash.

Osmeña said: “Suppose I give you Meralco shares in exchange for your service, you’re saying you should not declare it as income? Mr Oreta, you’re wrong, and I think you know you’re wrong.”

Osmeña supported Mercado’s theory, but said the money trail between Oreta and Binay has yet to be established.

“We’re taking it one step at a time. As far as I’m concerned, that transaction is illegitimate, illicit, and illegal. What has been proven so far is that there’s been a certain amount of money laundering. Whether the money went to Binay has to be proven,” Osmeña said after the hearing.

Besides money laundering, Osmeña and Senate Majority Leader Alan Peter Cayetano said that Oreta can be held liable for tax evasion and fraud. By Cayetano’s computation, Oreta allegedly owes P550 million to P600 million in taxes for his “compensation.”

This is the Senate’s 15th hearing into corruption allegations against the Vice President, who is national president of the BSP for two decades. Mercado and senators said that the land deal shortchanged the Boy Scouts.

Oreta is a friend of Binay, and was a top campaign donor to the 2013 senatorial bid of his daughter, Senator Nancy Binay. His business partner, Ongpin, was trade minister during the Marcos regime.

Vice President Binay again did not face the inquiry, which he has long rejected as a ploy to undermine his 2016 presidential bid. (READ: Boy Scouts: No truth to kickback claims vs Binay, and Binay: ‘Gambling’ Mercado likely took BSP’s P200M) 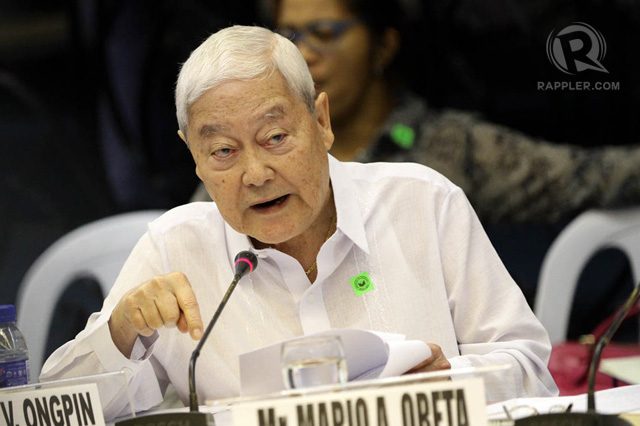 At the start of the hearing, Ongpin said Mercado’s allegations were a “complete nonsense.” He said Alphaland will aggressively pursue the P100 million libel suit the firm filed against Mercado, who negotiated the agreement when he was still allied with Binay and senior vice president of BSP.

Ongpin explained that he agreed to give Oreta the 5% when he recruited the latter to Alphaland in 2007.

Oreta confirmed this. “I made sure I am compensated properly. I am a dealmaker. I told them I cannot accept employment only for salary. I have to have enough so we have to deal on [projects on a] case-to-case basis. If ever I package a deal for Alphaland, I should get carried interest.”

The Alphaland president said that, at one point, he needed money and asked Ongpin for a loan. He then later asked Ongpin to “elevate” the 5% shares from Noble Care to the “mother company” of Alphaland.

Yet Cayetano said that when Alphaland bought back the shares from Noble Care, this was the time Oreta allegedly transferred the money to Binay. He pointed out that the shares disappeared from Noble Care’s financial statement.

“The shares were gone on November 11, 2010, and that was the birthday of Vice President Binay that’s why Mercado is saying this is not Oreta’s money but a birthday gift,” Cayetano said.

Oreta insisted that the shares were his, and he has not sold them yet.

This prompted Cayetano to ask the Anti-Money Laundering Council (AMLC) to look into the bank accounts of Oreta and Noble Care.

Cayetano then asked Oreta: “Are you ready to waive the bank secrecy of Noble Care so we see where the money went? I have information it was transferred to ‘you know who.’”

Oreta refused to make the waiver. Mercado said it was Binay who introduced him to Oreta. Oreta confirmed this, saying he approached the Vice President upon finding out about the BSP property to strike a deal for Alphaland.

Oreta said, “VP Binay brought me down to Mercado’s office [in Makati], and said, ‘You be the ones to talk to each other.’”

Mercado recalled that Binay asked him to sign the deal on the BSP property when the then Makati mayor was leaving for abroad. The whistleblower claims he lobbied for a 20% share for the BSP, but Binay’s financial adviser Gerry Limlingan told him to settle for 15% because the 5% will actually fund Binay’s campaign.

“VP Binay was abroad when we signed the deal so I now believe that he really set it up. He asked me to sign, and then later, he asked the other BSP officials to sign the amended deal. But he never signed deals himself,” Mercado said.

Cayetano said that this was Binay’s ploy to avoid liability using his “lawyer mentality.”

“There is a pattern. Every time there is a deal to be signed, VP Binay is missing and he sends the vice presidents of his organizations. In negotiations, investigations and signing, the president of the Boy Scouts is missing. But in photo ops and headlines, he is there. So why does the BSP have a president in the first place?” – Rappler.com