PNP-AFP rift? ‘We are one, we will overcome’ “The AFP and the PNP are solidly working together for the benefit of everyone in this country,” AFP spokesman Colonel Restituto Padilla Jr. said at the beginning of the ceremonies in Camp Aguinaldo. Mistahs of PMA ’81 and the Mamasapano tragedy

“We are one, we are strong and we will overcome,” added AFP chief General Gregorio Catapang Jr.

Things are – or at least perceived to be – shaky between the Armed Forces of the Philippines (PNP) and the Philippine National Police (PNP) after “Oplan Exodus,” a January 25 PNP Special Action Force (SAF) operation to neutralize Zulkifli bin Hir, better known as “Marwan,” and Abdul Basit Usman.

The cops were able to kill Marwan, but Usman escaped.

“Oplan Exodus” was a top-secret operation that saw the acting PNP chief, the Interior Secretary and even the military out of the loop. Local military forces did not know of the SAF’s operation until after cops entered Mamasapano. (READ: Despite Mamasapano clash, ‘all okay in PNP’ – acting chief)

SAF officials, citing previous bad experiences in joint operations with the AFP, decided to only inform the military “time on target,” or only after troopers had entered Mamasapano. (READ: Why SAF didn’t trust military)

As a result, soldiers were unable to send help on time, since they were left unsure of where the elite policemen were and what exactly was going on inside Mamasapano.

Both AFP and PNP personnel have expressed their dismay over each other.

The PNP, for the AFP’s failure to send help for beleaguered SAF troopers in time and the AFP, for the PNP SAF’s failure to coordinate with local military forces. (READ: Mamasapano: What ifs and what could have beens)

The AFP and PNP’s ties go beyond that of being the country’s internal and external security forces. Most of the two forces’ top officials were once classmates in the Philippine Military Academy. The PNP traces its roots to the Philippine Constabulary, which was once part of the AFP.

Catapang denied Cayetano’s assertion, insisting the AFP did not have enough time, nor did it have enough information to act accordingly. (READ: AFP unaware of 2nd SAF team) 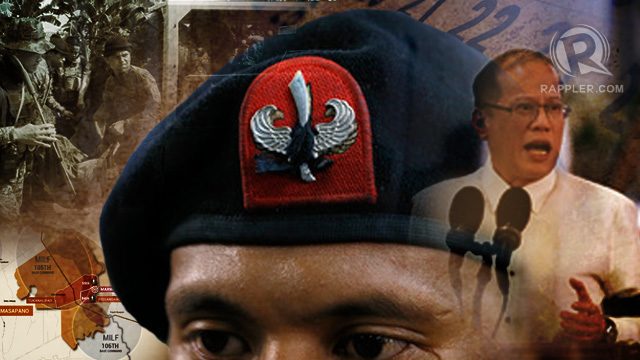 Interior Secretary Manuel Roxas II, whom one senator had characterized as among the “calmer” voices in the issue, turned emotional before the Senate as he questioned why it took the AFP so long to send help.

The week before legislative probes began, relieved SAF commander Police Director Getulio Napeñas figured in a word war with Catapang, offering a narrative contrary to that of his PMA upperclassman during a press conference held hours after Catapang’s own media briefing. (READ: AFP clears troops of liability in Mamasapano)

PNP Office-in-Charge Police Deputy Director General Leonardo Espina, Catapang’s mistah (classmate) from the PMA class of 1981, on the same day emphasized there was no feuding between the AFP and the PNP.

(Maybe some elements of the AFP and PNP on the ground had misunderstandings. If it’s possible, let’s limit the discussion of AFP and PNP differences to them.)

Both the PNP and AFP, on separate occasions, have emphasized their commitment to the peace process.