Resignation? Aquino has no plans to step down – Palace 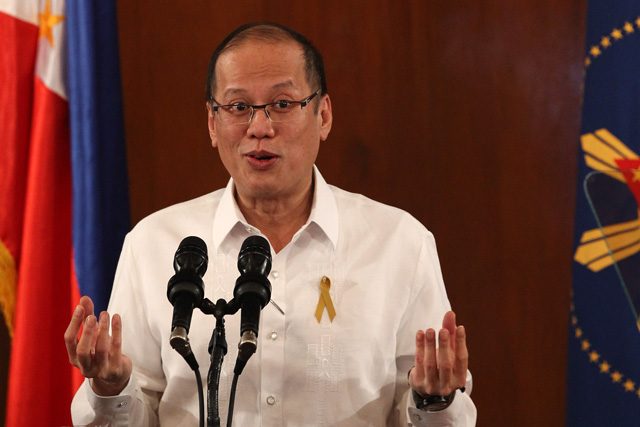 Facebook Twitter Copy URL
Copied
'The President will step down on June 30, 2016. I can tell you that. Any reports or stories of any other exit plan apart from that are fictitious,' said Deputy Presidential Spokesperson Abigail Valte

Amid continuing calls for the resignation of Aquino – after the controversial Mamasapano operation that killed 44 elite cops – Malacañang remains unnerved, saying the President has no plans to step down until the end of his term.

“The President will step down on June 30, 2016. I can tell you that. Any reports or stories of any other exit plan apart from that are fictitious,” Deputy Presidential Spokesperson Abigail Valte said on Friday, February 20.

She also said the calls were nothing new, and that the opposition against the President is normal, and “part of the democratic space that we enjoy.”

“For one, we do not share the same perception that it is gaining ground. The President is no stranger to calls for resignation. In the course of his more or less 5 years…in office, we have seen these sporadic calls from different groups, and they always have not resulted in a situation that would please them, or it has not resulted favorably for them,” she said.

“The President is cognizant that it is part of democracy. He is also cognizant that he – as president, as an individual – cannot also please everybody all the time and he is cognizant of the fact that there are opposing views that exists in any democratic space, and as such, he just does his work the best that he can,” she said.

Valte said Malacañang does not see the need for a loyalty check among the military and the police despite an alleged coup plot, as they “have made their positions clear on the issue.”

Calls for Aquino to step down were triggered by a January 25 operation in Mamasapano town in Maguindanao.

Since the incident, various sectors have asked Aquino to resign, frustrated by his handling of the event. Further dissatisfaction stems from confusion over Aquino’s role in the operation.

Separate investigations – including one by the Board of Inquiry (BOI) and probes in the House of Representatives and the Senate – are seeking to determine what went wrong in the operation.

Malacañang has urged the public to await the findings of the BOI consisting of PNP officials, before jumping to conclusions. – Rappler.com