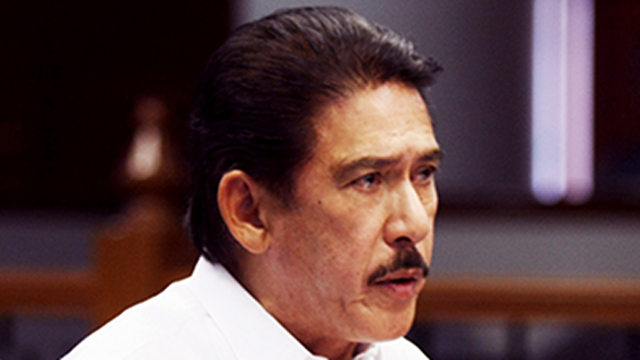 MANILA, Philippines – The senator pilloried for including online libel in the anti-cybercrime law renewed his push for a bill that will protect broadcast and online journalists.

Senator Vicente Sotto III reiterated the need to pass a bill he authored that extends beyond print publications the protection from being compelled to reveal the identity of a source of a news or investigative report.

Sotto’s Senate Bill No. 95 amends Republic Act 53, the 1946 press freedom law known as the Shield or Sotto law. It was named after the senator’s grandfather, the late Senator Vicente Yap Sotto, who authored the measure.

(I filed this bill to expand the Sotto Law, press freedom law, to include the Internet because the law only covered newspapers, written publications. They do not know that even radio and TV broadcasters, and online reporters are not covered.)

The senator first filed the bill in 2013 but again brought it up while discussing media leaks from Senate executive sessions on the Mamasapano clash. Executive sessions are closed-door meetings, supposed to be strictly confidential to protect national security and public interest.

Sotto said that in two previous cases, leaks from executive sessions became controversial, and reporters were pressured to reveal their sources. Yet he said the journalists stood their ground, and invoked the Sotto law.

One case happened in relation to the controversies surrounding former President Joseph Estrada. The other was on the NBN-ZTE deal under the Gloria Macapagal-Arroyo administration in 2007 when then Senator Joker Arroyo demanded that the Philippine Daily Inquirer reveal the 4 sources it cited to report that he allegedly blocked the testimony of former socio-economic planning secretary Romulo Neri.

“There was a case about Erap before his impeachment, on [the illegal numbers game] jueteng. It leaked and they ran after the writer. Also the case of Senator Joker. But the writer invoked the Sotto law. But the danger there is you from the online media are not covered,” Sotto said in a phone interview.

In the Inquirer-Arroyo case, media watchdogs and press freedom advocates cited the Sotto law to defend the principle of protecting confidential sources, and to prevent politicians from intimidating journalists.

“Protection of confidential sources of information is also an obligation for journalists and key to getting informants to come forward. This is particularly important in uncovering, among others, corruption in government,” the National Union of Journalists of the Philippines (NUJP) said then.

‘Conform with the times’

On the forms of media, the measure amends the law to include “print, broadcast or electronic mass media, including but not limited to newspaper, magazine, or periodical of general circulation, radio television, cable, Internet site, and other electronic media outlet (sic).”

The bill provides that journalists working for these media “cannot be compelled to reveal the source of any news report or information appearing in said publication, which was related in confidence…unless the court or a House or committee of Congress finds that such revelation is demanded by the interest of the State.”

In his explanatory note, Sotto said that the 1946 law must be amended to reflect technological developments.

“To conform with the changes of the times and further protect the freedom of the press, it is proposed that the said law be amended to expressly include the responsible personnel from radio, television, cable and internet-based media from the exemption contemplated by the law,” he wrote.

In 2013, Sotto was heavily criticized for his stance supporting online libel, which extended to the Internet the criminal liability for defamation. He said he is against “destroying the reputation of others.”

The comedian-turned-politician also drew netizens’ ire for plagiarizing online sources for his speeches attacking the Reproductive Health (RH) law in 2012.

Still, the senator maintains that he is not opposed to technology and free speech.

He called on Senate public information committee chairperson Grace Poe to hear his bill, and support its passage.

“The purpose of the [Sotto] law of protecting and enhancing the freedom of the press, so as to inform the public of current events and issues that affect their lives, remains relevant and important,” Sotto said. – Rappler.com