Kris Aquino says Herbert Bautista proposed to her before their breakup

Feb 25, 2015 11:53 AM PHT
Rappler.com
Facebook Twitter Copy URL
Copied
'I said I realized he never said he loved me, he was simply tired, and I didn’t want to be his version of Salonpas, Alaxan, Ben Gay, or a massage,' says Kris in her new blog 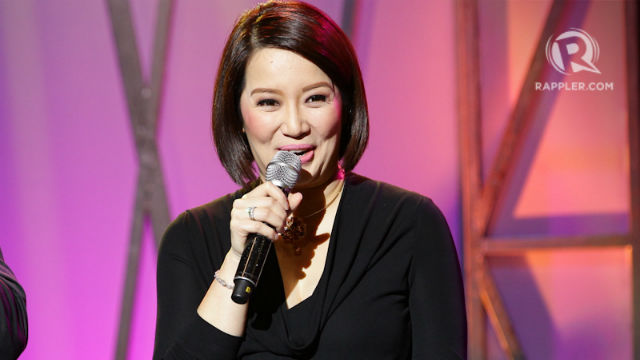 MANILA, Philippines – Months after Kris Aquino and Quezon City mayor Herbert Bautista’s short-lived romance died out, a new blog post on her website withlovekrisaquino.com shed more light on new details of the pair’s past relationship, including a not-so romantic proposal.

Kris divided her story into 3 parts, each part starting with a song followed by its lyrics. The first part featured Whitney Houston’s “Where Do Broken Hearts Go,” where she shared a detailed account of what happened between them.

The last two parts, headed by songs “Make It Real” by the Jets and “I Look To You” by Whitney again, contained her realizations and learnings.

In the blog entry, Kris doesn’t name Herbert explicitly, but the details she shared coincide with the timing of her relationship with him. They first went public in April, but weeks after Herbert broke off the relationship unexpectedly.

In the post dated February 24, Kris slipped in a short anecdote of Herbert’s “proposal,” saying that it happened on the first Friday of April 2014.

“This is the first time i’ll publicly acknowledge this, because I can now recall with absolutely no bitterness or regrets; on the first Friday of April nearly a year ago during merienda, he said he was tired, he didn’t want to play games, he was tired of chasing and of running away, and he wanted to feel secure with someone he could grow old with. He said, walang romance, walang lokohan, walang bolahan. Okay na raw ba ko to marry him kasi nga PAGOD na sya?”

(He said, no romance, no tricks, no empty promises. Would it be okay to marry him because again, he was TIRED?)

“I remember laughing and saying that was probably the least romantic proposal any woman has ever received, but because we were so similar in our weirdness, I was in agreement; I wanted to grow old with him because I knew we’d never be bored conversing, and maybe this was where God led 2 individuals who deserved a chance at life long companionship with maturity, and full acceptance of equally colorful pasts,” she wrote.

However, after Herbert’s dinner with Kris’s family, she cried during her heart-to-heart talk with him. She said she realized that he was only “tired,” and that she never heard him say he loved her during their time together.

“I said I realized he never said he loved me, he was simply tired, and I didn’t want to be his version of Salonpas, Alaxan, Ben Gay, or a massage. He cried too and said he was scared, overwhelmed, afraid of being branded a “user” when he has given the majority of his life to public service, and maybe we should take a step back,” she wrote.

Herbert broke up with Kris the week after he proposed, “right before Bimb’s 7th birthday party.”

While they tried to maintain their friendship, Kris said that when Herbert tried to call her 4 times on February 15, the day after her Valentine’s birthdate – she didn’t pick up. Bimby, who was also witness to the phone calls on Kris’ end, told his mother to pick up the phone.

“Bimb saw his name flashing on my phone, and he told me: ‘Mama, go ahead, talk to him because when you talk to him, you get happy. But remember after, you get so sad and I hate seeing you cry.’”

Kris then praised her son for giving her that wake up call, saying that his wisdom shone through his innocence.

Although Kris and Herbert didn’t last, here are other details from their “whirlwind” romance:

Kris may have been jaded due to her rejection, but she still found the bright side of it, saying she needed the rejection to make her value the love she presently had, as well as to be more compassionate towards the people around her.

Recently, Mayor Herbert dropped by to surprise Kris in December, to congratulate her on the success of her MMFF 2014 film Feng Shui 2. – Rappler.com