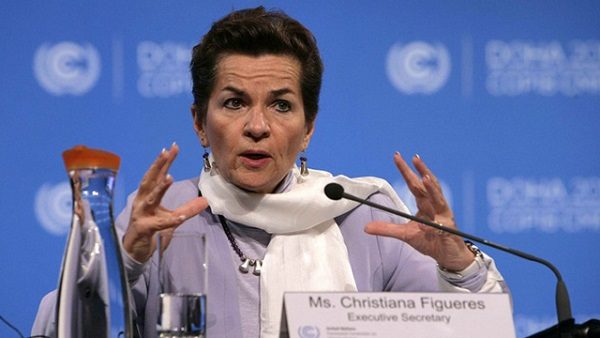 MANILA, Philippines – The head of the United Nations Framework Convention on Climate Change (UNFCCC) will be in the Philippines to join French President Francois Hollande’s call for global action in curbing climate change.

Christiana Figueres, the UNFCCC Executive Secretary, is one of the most influential voices in international climate change negotiations.

It is under the banner of the UNFCCC, which 196 countries are parties to, that nations gather to decide what to do about global warming.

Figueres will accompany Hollande when he visits Guiuan, Eastern Samar, on Friday, February 27. On the same day, she will visit a solar lighting project site in Taguig City.

As head of the UNFCCC since 2010, Figueres has convened 5 Conferences of Parties (COPs) – international summits where countries negotiate on steps to be taken to keep climate change from becoming irreversible.

The COP this year, dubbed COP21, will be held in Paris, France, and promises to be the most important gathering so far. It seeks to produce an international agreement in which governments commit to reduce their greenhouse gas emissions.

Stabilizing the amount of GHG in the atmosphere is the only way humanity can stop global temperatures from rising by 2 degrees Celsius, a temperature level at which climate change becomes irreversible and catastrophic. (READ: What PH did about climate change in 2014)

Figueres has played a prominent role in climate negotiations. She herself was a negotiator, representing her home country, Costa Rica, since 1995. She was involved in gatherings that produced the UNFCCC and the 1997 Kyoto Protocol, the first international agreement to reduce GHG.

She has been at the helm of several groundbreaking climate change programs, including the first-ever carbon finance program in the developing world. The program allowed The Netherlands to purchase carbon emission reductions from Latin America.

Heading the UNFCCC is no easy task. As its chief, Figueres has had to galvanize support from its 196 party-governments to ensure successful negotiations on climate. Several of these governments have clashing interests and negotiations are always in danger of failing or extending without concrete decisions being made.

Despite current pledges by governments, scientists say the world is on track to warm by 3 to 4 degrees – which can generate stronger typhoons, debilitating droughts, sea level rise, and extinction of as much as 50% of the world’s species.

Aside from Figueres, Hollande will also be accompanied by Hollywood actors and the leader of the East Orthodox Church. He has said his visit to the Philippines aims to build momentum for COP 21.

The Philippines was recently named the country that has suffered the most from the phenomenon. In 2013, it was hit by one of the strongest typhoons to make landfall in history. – Rappler.com