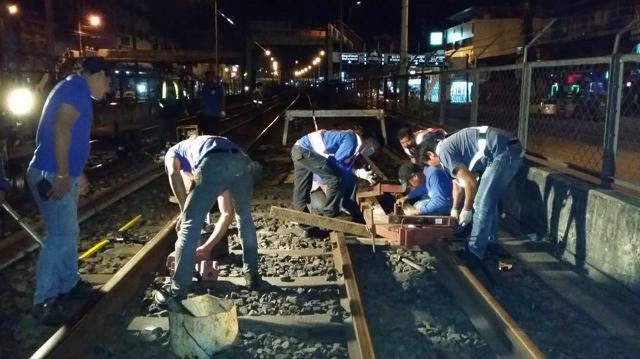 MANILA, Philippines (UPDATED) – Operating hours of the Metro Rail Transit 3 (MRT3) will be shortened this weekend to give way for rail replacement, in a bid to address one cause of the mass transport line’s frequent glitches.

The MRT will close at 9 pm on Saturday, February 28, and will resume operations at 12 noon on Sunday, March 1.

The train line normally operates from 5:30 am to 11 pm on weekends.

Buenafe said 150 meters of rails will be replaced between Taft and Magallanes stations over the weekend.

Stabling rails are the end-portion of the tracks located within the MRT3 depot, and are intended to be used as parking facilities for light rail vehicles (LRVs) that are not in use.

“Since safety is my priority, this solution is very clear and simple to me. I proposed to switch the worn-out mainline rails with the stabling rails in the interest of MRT3 passengers,” Buenafe said.

He added that this will be the first of a series of repair projects to replace the railway tracks that have been blamed as the cause of the train line’s frequent glitches.

The Department of Transportation and Communications (DOTC) expects the delivery of additional brand new steel rails in June as the replacement of old rail tracks of the aging (MRT3) along EDSA starts Friday.

The agency is scheduled to receive 7,296 meters of brand new steel rails in June to be used for further rail replacement works later this year.

The agency has awarded on January 29 a P61.50-million ($1.40-million) contract to the Jorgman-Daewoo-MBTech joint venture for the supply of 608 pieces of 12-meter steel rails for MRT3. The joint venture is composed Jorgman Planning & Development Corporation, Korea’s Daewoo Group, and MBTech Group of Germany.

“We’re doing this to enhance safety and minimize glitches, and we chose this schedule to mitigate inconveniences to the riding public,” Abaya said.

On February 17, two MRT trains suddenly stopped due to the activation of its automatic train protection (ATP) systems. Buenafe said the aging trains and rails may have affected the signaling sensors.

The MRT is one of Metro Manila’s main mass transit lines. Over 600,000 passengers ride the overburdened train line every day. – Katerina Francisco / Rappler.com