Chiz: No conflict of interest in Balesin wedding 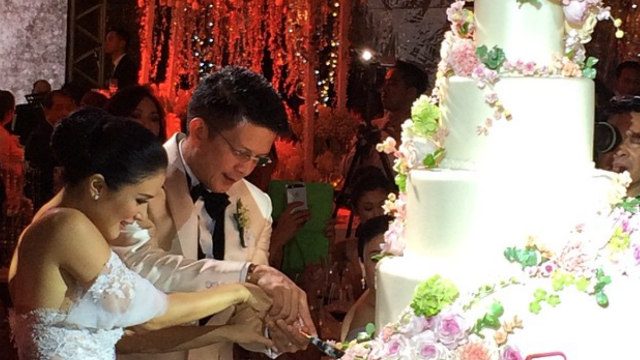 Facebook Twitter Copy URL
Copied
Escudero says in Filipino, 'We spent what we could afford and what we could do. We did not spend beyond our means.'

MANILA, Philippines – No conflict of interest. This is what Senator Francis “Chiz” Escudero said on Thursday, February 26, of his grand  Balesin Island Club wedding attended by celebrities and some Filipinos on Forbes’ richest list.

The 45-year-old senator wed 30-year-old celebrity Heart Evangelista in a February 15 ceremony attended by movers and shakers in business, politics, media, and entertainment.

“Wala akong nakikitang (conflict) dahil lahat naman halos ay may ugnayan, may relasyon sa kung sinuman. Ang tanong kung gagamitin mo ba ang pwesto mo para mapaburan o hindi man, maipit ang sinumang negosyante,” Escudero said. (I don’t see any conflict because almost everyone has relations or is related to someone. The question is, will you use your position to favor or squeeze any businessman.)

(That’s been my position ever since. I will stand for what I think is right and I will fight what I think is wrong. Whatever conflict, what is important is to declare it so that whatever your position is on an issue, this is clear to the public and they know about it.)

Escudero, who hails from Sorsogon, and who was listed as the 2nd poorest senator based on his 2013 Statement of Assets, Liabilities and Net Worth, said he and his wife spent within their means. They have not, in fact, made any payments yet since they have not been billed by Balesin, which is run by Ongpin’s Alphaland.

(Saying how much expenses were leaves a bad taste in the mouth. We just spent what is right, a lot of people helped, particularly because my wife comes from showbiz, that’s why there were a lot of sponsors. Not sponsors of the wedding.)

Asked if GMA-7, which is home to Escudero’s new wife, sponsored their wedding, Escudero said he leaves it up to the network to say so. “Ginastos namin kung ano ang kaya at kaya naming gawin. Di kami gumastos ng sobra sa di namin kaya.” (We spent what we could afford and what we could do. We did not spend beyond our means.)

An Inside Track item on Rappler asked whether Escudero may have violated the Code of Conduct and Ethical Standards for Public Officials and Employees or RA 6713. The Code says public servants “and their families shall lead modest and simple lives appropriate to their positions and income.” They are also supposed “to not indulge in extravagant or ostentatious display of wealth in any form.”

As a rule, public officials are required to maintain “a standard of living within the public official and employee’s visible means of income as correctly disclosed in his income tax returns, annual statement of assets, liabilities and net worth (SALN) and other documents relating to financial and business interests and connections.” – Rappler.com