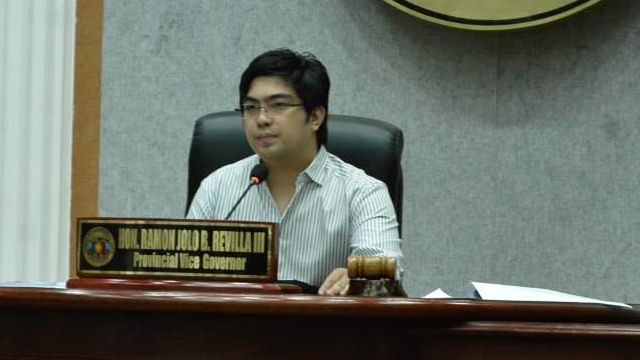 MANILA, Philippines (2nd UPDATE) – Cavite Vice Governor Jolo Revilla, son of detained senator Ramon Revilla Jr, was rushed to the hospital on Saturday, February 28, after accidentally shooting himself on the chest while cleaning his gun.

Lawyer Raymon Fortun, the Revilla family spokesperson, made the statement past 10 pm, hours after it was reported that the vice governor had suffered a gunshot wound and was rushed to the  Asian Hospital and Medical Center.

“At 9 am today at Ayala Alabang, Vice Governor Jolo Revilla suffered a single gunshot wound on his right chest after he accidentally fired a .40 Glock handgun while cleaning the same,” Fortun said.

He said that Revilla is currently under observation and medication at the Asian Hospital, where he will remain “for at least the next 48-72 hours.”

“The Revilla family asks for prayers for his speedy recovery,” the lawyer said.

In an interview on dzBB, Lolit Solis said that among the Revilla children, the vice governor is the most affected by his father’s detention over corruption charges in connection with the pork barrel scam.

“His father is his idol,” said Solis, who also manages the show business career of Senator Revilla.

The talent manager said that she noticed that something seemed amiss with Revilla when they met on Friday, as he was talking about off-tangent matters.

“It was clear that he was really going through something,” she said in Filipino.

Solis said Revilla’s emotional struggle might have been compounded by the latest controversy to hound his father – his unauthorized visit to detained Senator Juan Ponce Enrile at the Philippine National Police General Hospital, which led to the relief of some PNP officials.

She also said that actress Jody Sta Maria quickly rushed to the hospital to be with Revilla. – Rappler.com