LTFRB to pilot test GPS in buses to regulate speed

Mar 4, 2015 4:45 PM PHT
Rappler.com
Facebook Twitter Copy URL
Copied
Under the scheme, a public bus will be installed with a GPS device and communication system that will continuously send speed and location data to authorities 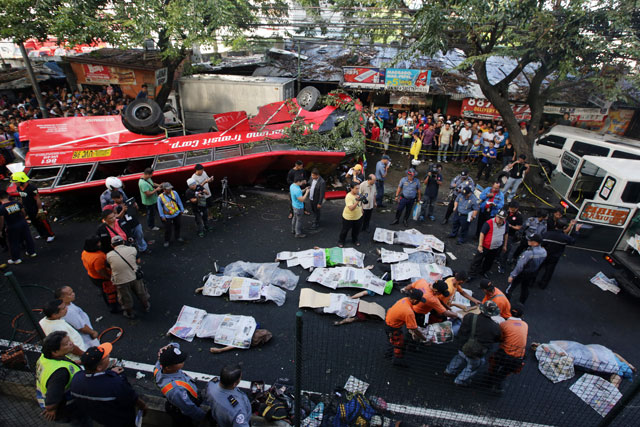 LTFRB Chairman Winston Ginez said the scheme, which would help promote road safety,  will be pilot-tested on selected bus units in the second quarter of 2015.

(The spate of accidents in major highways is alarming. Reckless driving by irresponsible bus drivers cause public damage, which is why the LTFRB will launch a program to limit the speed of PUBs.)

Ginez made the announcement a day after a Victory Liner bus fell of a ravine on its way to Baguio City, hurting over 20 passengers.

The GPS device is the most viable option recommended under the “Study on Speed Control of PUBs” conducted by the UP National Center for Transportation Studies (NCTS) in October 2014, the LTFRB chief said.

He said use of GPS device is seen to promote road safety as the UP NCTS study cited PUBs as causing the highest number of road accidents.

The study also showed that public bus passengers are 6 times more at risk of an accident than private car passengers, and 5 times more than riders of jeepneys and UV express service or shuttles.

“This study validates that there is an urgent need to regulate bus speed to prevent more road accidents from happening on our roads and ensure safety of the riding public,” Ginez said.

The current speed limit along expressways is 80 kilometers per hour (kph); the speed limit in urban areas is 60 kph.

The study recommends maintaining limits but must be closely monitored and controlled using a GPS device.

Under the scheme, PUBs will be installed with a GPS device and communication system that will continuously send speed and location data to the control center.

A bus will be tagged as speeding when the GPS device exceeds the imposed speed limit. Bus passengers can also monitor the bus’ real-time speed through an on-screen display system installed in the bus. – Rappler.com