China to Philippines: ‘We’re destined to be friends’ 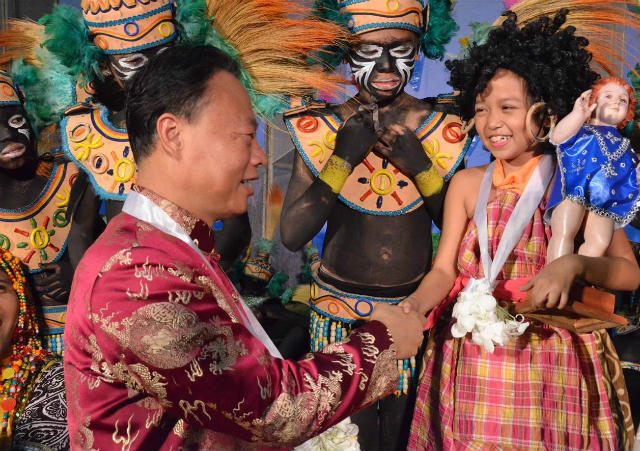 Facebook Twitter Copy URL
Copied
Citing Manila's gains from Beijing in trade, China courts the Philippines as a sea dispute brings their relationship to its lowest point in 40 years

MANILA, Philippines – Marking 40 years of diplomatic ties with the Philippines, China trumpeted the “560 times growth” of trade between the two countries as disputes over the West Philippine Sea (South China Sea) threatened their relationship.

In a speech at the Philippines’ Department of Foreign Affairs (DFA), Chinese Ambassador to the Philippines Zhao Jianhua also hailed a recent meeting between the two countries’ leaders as the start of a “fresh process” to boost their ties.

“We are destined to be friends and partners,” Zhao said Tuesday, March 4, as he opened a traveling exhibit to mark the 40th anniversary of Philippine-China relations.

Through his speech, the ambassador showed China’s efforts to court the Philippines even as the West Philippine Sea dispute brought their relationship to its lowest point in years. (READ: In territorial spat, education turns Filipinos against China)

Zhao focused on the benefits the Philippines can get from China in trade, education, and tourism. A leader of the Filipino-Chinese business community, Dr Alfonso Siy, earlier said these gains from China should prompt the Philippine government to set aside its differences with the rising superpower.

Citing a long history of trade, the ambassador began his speech with a Chinese proverb: “If you take history as a mirror, you shall know the future.”

Zhao pointed out that the Chinese and Filipino people “began friendly exchanges over 1,000 years ago.”

He recounted maritime trade between the Philippines in China over the centuries. He said Filipinos, for one, imported silk from China, while the Chinese brought home crops such as corn, potatoes, and tomatoes from the Philippines.

Philippine statistics also show that 1.5% of the Philippine population comes from the ethnic Chinese community. Many others as well have Chinese ancestry. The richest man in the Philippines, Henry Sy, and other top Filipino businessmen also come from Chinese families.

“This clearly shows that our two nations are intertwined by both strong kinship and historic ties,” Zhao said.

He also recalled the formal establishment of Philippines-China relations on June 9, 1975, after then Philippine President Ferdinand Marcos and Chinese Premier Zhou Enlai signed a joint communiqué. The ambassador also said more than 420,000 Chinese tourists visited the Philippines in 2014.

In his speech, Zhao added that over the past 40 years, trade between the two countries “surged from $72 million to more than $40.5 billion in 2014, which is a 560 times growth.” He said this has made China one of the Philippines’ top trading partners.

“I strongly believe that the China-Philippine relationship has served and should continue to serve the fundamental interests of our two peoples,” he said

‘We should never be confused’

“Looking into the future, our bilateral relations enjoy great opportunities and vast potentials,” the ambassador added.

He noted that Philippine President Benigno Aquino III and Chinese President Xi Jinping had a “brief but friendly conversation” in November 2014. This happened on the sidelines of the 22nd Asia-Pacific Economic Cooperation Chief Executive Officers Summit in Beijing.

It was the first time Aquino and a Chinese president met since 2012, after a standoff between their vessels in Panatag Shoal (Scarborough Shoal) in the West Philippine Sea.

Reportedly due to the sea dispute, China later sidelined Aquino when it cancelled an invite for the Philippine leader to visit Nanning, China, in 2013. (READ: Aquino rejects ‘unusual’ conditions for China trip)

An international think tank explained that China sees Aquino as “provocative” compared to his “receptive” predecessor. (READ: Why China prefers Arroyo over Aquino)

Zhao said the meeting between Aquino and Xi “ushers in a fresh process to enhance our bilateral relations.”

“I am fully confident that both sides can work together for a brighter future of our bilateral relations,” he added, even as the Philippines protests China’s recent construction of artificial islands in the West Philippine Sea. (READ: Philippines to UN: China reclamation destroys nature)

Zhao told his Filipino audience at the DFA: “The most famous thinker and philosopher, Confucius, once said, ‘When a man turns 40, he is never confused.’ As our relationship turns 40, we should never be confused. We should be friends and we should be partners.” – Rappler.com