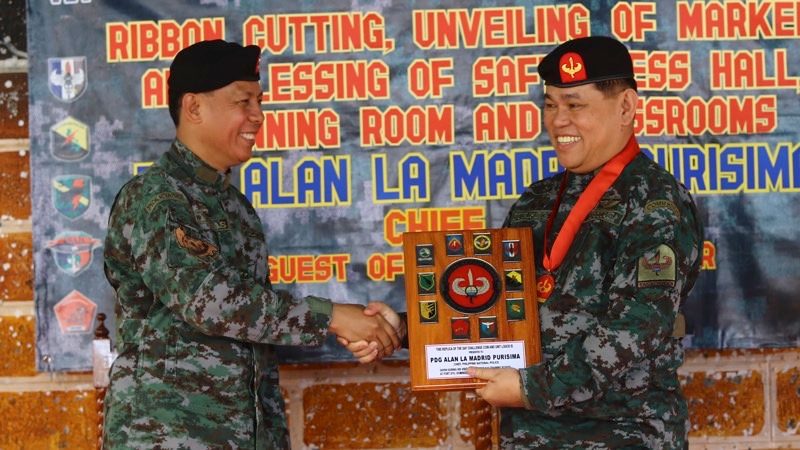 Facebook Twitter Copy URL
Copied
A document obtained by Rappler shows former PNP chief Alan Purisima – then suspended – was briefed on ‘Oplan Exodus’ on January 5, ahead of the President

MANILA, Philippines – Before the President was briefed on a high-risk police operation to neutralize bomb makers and terrorists in Mamasapano, Maguindanao, the commander of the police Special Action Force (SAF) made sure to give a full briefing to the chief of the national police, Director General Alan Purisima.

The only problem? At the time of the briefing, Purisima, who eventually resigned as PNP chief, was serving a preventive suspension order over a graft case.

The briefing for Purisima, which took place on January 5, 2015, was contained in the PNP SAF’s operational briefing for “Oplan Exodus,” a document that was presented to the various bodies investigating the Mamasapano bloodbath. “Briefing with CPNP (Chief, PNP),” read the entry in the SAF’s calendar.

It’s also the same PowerPoint presentation shown to the SAF troopers involved in “Oplan Exodus” prior to the operation.

The presentation, which was obtained by Rappler, includes a calendar of the SAF’s activities leading up to the ill-fated operation.

President Benigno Aquino III himself referred to it when he spoke during a March 9 meeting with religious leaders in Malacañang.

(The entire plan was presented to me in the form of a PowerPoint presentation. If we look at it, the planning was thorough)

After the January 5 briefing to Purisima, another briefing was held on January 9 – this time before the President in Bahay Pangarap, Malacañang. (READ: Aquino, Purisima were at final ‘Oplan Exodus’ briefing). In attendance were Purisima, Napeñas and PNP Intelligence Group chief Senior Superintendent Fernando Mendez.

Given the suspension order against him, Purisima should not have dabbled into PNP affairs. At the  time, it was PNP OIC Deputy Director General Leonardo Espina who was on top of the PNP’s chain of command.

The January 5 briefing for Purisima also raises questions about what the President decided to tell the nation in the aftermath of Mamasapano.

In his first public address after the Mamasapano clash on January 28, Aquino said Purisima was involved only up until the Ombudsman’s suspension order.

“General Purisima was helping me understand the jargon. But he was involved up to the point in time, directly, that he was ordered suspended by the Ombudsman,” Aquino said then. Purisima was suspended in December 2014.

On February 6, when Aquino accepted Purisima’s resignation, he never mentioned the general’s involvement in the operation. In a televised address, Aquino instead narrated the basis of his long-standing friendship with Purisima and said: “For this reason, perhaps you will understand why I find it painful to see him leave the service under these circumstances. I have accepted, effective immediately, the resignation of General Purisima. I thank him for his many years of service prior to this tragedy.”

Purisima has also downplayed his role in “Oplan Exodus” in interviews and public Senate hearings.

Both he and the President have blamed Napeñas for what happened.

But according to Napeñas, it was Purisima who ordered him not to coordinate with the military and Espina.

Purisima however insisted that he merely gave Napeñas an advice, not an order. During a Senate hearing, Purisima conceded that he “advised” Napeñas to keep the operation a secret from Espina and Interior Secretary Manuel Roxas II for “operational safety.”

The SAF’s January 5 briefing for him, however, likewise raises questions about what orders and decisions were made after that.

Sources in the police said that even during Purisima’s suspension, many senior police officials remained loyal to him, and continued to report to him.

According to Rappler sources and public interviews with key personalities, it was Purisima who gave Napeñas the intelligence packet that the operation was based on.

Before his suspension, Purisima called Napeñas to the “White House” where he met with Mendez from the Intelligence Group.

Purisima told Napeñas to work with Mendez on the “new location” of terrorists Zulkifli bin Hir (Marwan) and Abdul Basit Usman – targets of “Oplan Exodus – and added that he had an agent already working in Mamasapano.

After the January 9 briefing with the President, it was also Purisima who told Napeñas that he would “take care of” informing Armed Forces of the Philippines (AFP) chief of staff Gregorio Catapang, who is his classmate from the Philippine Military Academy (PMA) Class of 1981.

It was Purisima who alerted the President that Marwan had been neutralized. Purisima also told Aquino that artillery and mechanized support from the AFP was made available in the early hours. (READ: Purisima misled Aquino?)

Military support, however, did not come until around 6:30 pm, more than 12 hours after SAF troopers entered Mamasapano.

Purisima has declined any media interviews following his resignation. His only public appearances have been at the Senate’s probe into the bloody operation.

He has submitted a sworn statement to the police Board of Inquiry (BOI), which includes a transcript of text messages between himself and the President.

But he declined an interview request from the BOI. (READ: Mamasapano probe: No Purisima interview)

He has also refused to allow the Senate and the BOI access to any other text messages he sent that day, including those for the President. The Mamasapano incident is the bloodiest one-day operation in PNP history and the worst crisis to hit the Aquino administration.