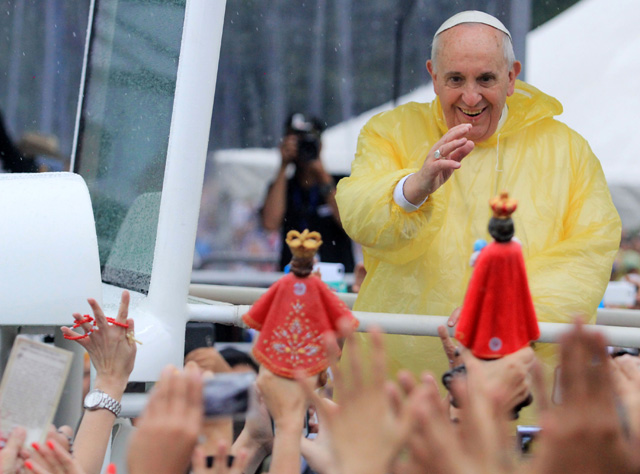 MANILA, Philippines – Nearly two months after he visited the Philippines, Pope Francis hailed the nickname Filipinos gave him – “Lolo Kiko” – as the 78-year-old pontiff criticized a society that “tends to reject the elderly.”

“When I was in the Philippines, the people called me ‘Lolo Kiko’, or rather, ‘Grandpa Francis,’” Francis said in Vatican City on Wednesday, March 11, during his weekly general audience. (READ: Lolo Kiko: Pope Francis in the eyes of the Filipino)

“Lolo” is the local word for “grandfather,” while “Kiko” is a nickname for Filipinos named Francisco. When he stayed in Asia’s most predominantly Catholic country from January 15 to 19, “Lolo Kiko” became a term of endearment for him.

By recounting this nickname, Francis “affirmed that he was able to identify with grandparents as he is of the same age,” the Vatican said in a statement.

The Pope was also “emphasizing that although society tends to reject the elderly, the Lord does not: on the contrary, He calls us to follow Him in all stages of life as old age, too, ‘contains a grace and a mission, a true vocation.’”

To drive home his point, Francis cited two biblical figures, Simeon and Anna, elderly people “who awaited the arrival of Jesus in the temple for many years, and who were resigned to dying before seeing Him.”

Simeon and Anna, however, “discovered a new strength” when Jesus’ parents, Mary and Joseph, finally brought their child to the temple. “Simeon improvised a beautiful hymn of jubilation and Anna became Jesus’ first preacher.”

The Pope also mentioned his predecessor, Benedict XVI, “who has chosen to spend the final part of his life in prayer and in listening to God.”

During his regular general audience on Wednesday, the first Jesuit pope urged the elderly to follow the “extraordinary old people” he mentioned.

He told them: “We can remind the ambitious young that a life without love is arid. We can say to the fearful young that anguish about the future can be defeated. We can teach the young who are too wrapped up in themselves that there is more joy in giving than in receiving.”

“Grandparents form the permanent ‘choir’ of a great spiritual shrine, where prayer of supplication and hymns of praise support the community that works and struggles in the field of life,” he added.

He also reminded the elderly to pray. “Praise and supplication to God prevent the hardening of the heart in resentment and selfishness,” he said.

“How sad it is to see the cynicism of an elderly person who has lost the sense of his or her own testimony, who is disdainful toward the young and does not communicate the wisdom of a lifetime! Instead, it is beautiful to see the encouragement that an elderly person is able to transmit to the young in search of the meaning of faith and life. It is truly the mission of grandparents, the vocation of the elderly,” he said.

“The words of the elderly hold something special for the young. And they know this. The words my grandmother wrote to me on the day of my priestly ordination I still carry with me now, in my breviary; I often read them and this does me good,” he added.

The Pope has consistently rejected a “throwaway culture” that disregards the young and the elderly.

When he visited the Philippines, he also urged Filipinos to care particularly for “those who are elderly and children without parents.” (Watch more in the video below.)

“Never let them feel isolated, alone and abandoned, but help them to know that God has not forgotten them,” the Pope said. – Rappler.com