MANILA, Philippines – Over 93,000 individuals have been forced to evacuate as the military continues to pursue the rebel group Bangsamoro Islamic Freedom Fighters (BIFF).

As of Thursday, March 12, a total of 93,402 persons or 19,075 families have fled their homes in 12 towns of Maguindanao, raising concerns that a humanitarian crisis is underway.

The Autonomous Region in Muslim Mindanao (ARMM) is spending P12 million per week on food packs as of Wednesday, March 11, when the number of displaced individuals were only at 72,585, figures from the regional government show.

Ceasefire monitors in the area have reported air strikes in at least two areas in Maguindanao over the past few days, forcing more families to run for cover.

With the number of displaced residents growing each day, a group of Moro professionals on Friday, March 13, sounded the alarm over the “insufferable violence” that refugees have been experiencing in evacuation centers.

“For many of bakwits (evacuees), this new round of exodus is a repeated life of harrowing tragedy that they do not deserve,” said Ameen Camlian, communications officer of Young Moro Professionals Network-Western Mindanao.

With no end to the conflict in sight, an aid worker from Oxfam, in an interview with The New York Times, warned of a “growing humanitarian crisis in Mindanao that is largely being overlooked.”

ARMM Executive Secretary Laisa Alamia earlier said the regional government could run out of supplies without help from national agencies if the conflict drags on till the end of March,

The ARMM is spending about P2 million per day for the purchase and distribution of food packs alone. Each food pack costs P450 and contains rations of rice, sardines, and noodles that sustains a family for 3 days.

Meanwhile, the Department of Social Welfare and Development (DSWD)  has released a total of P22.66 million worth of food packs and non-food items as of Tuesday, March 10.

Aside from food packs, the DSWD also distributed items such as mats made of water lily, water jugs, laminated sacks, and malong.

The regional government admits that the “non-food” needs of displaced residents, including clothes and sanitation, have yet to be addressed in full.

Booths will be set up inside the ARMM compound in Cotabato City to receive donations for refugees, especially non-food items such as clothes, blankets, and sanitation needs.

An “all-out offensive” was launched against the BIFF on February 25 in the aftermath of the police operation in Mamasapano, which killed Malaysian terrorist Zulkifli bin Hir, better known as Marwan. Local terrorist Abdul Basit Usman was, however, able to escape. (TIMELINE: Mamasapano clash)

The military said about 100 rebels, including 3 relatives of Usman, have been killed since the offensives began. The government, meanwhile, has lost at least 6 soldiers. 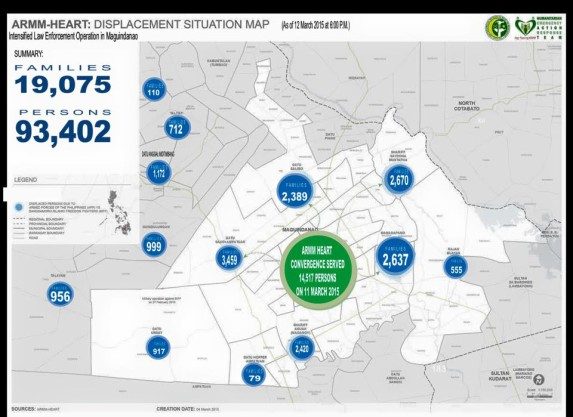