MANILA, Philippines – In October 2014, Pope Francis launched his pet project – a meeting of bishops on the family, which aims for a more caring approach toward modern issues such as contraception, gay marriage, and divorce.

The Synod of Bishops on the Family is so important that bishops “felt the spirit” of the Second Vatican Council, a historic gathering of bishops from 1962 to 1965.

(The Second Vatican Council, or Vatican II, reformed the Catholic Church and clarified its role in the modern world. Vatican II, for instance, allowed the use of vernacular languages such as English in Masses, instead of strictly Latin.)

For Filipinos, however, it’s not only the meeting’s scale or the issues at stake that make the Synod matter.

The Synod is also a Filipino milestone because the Pope placed a Filipino in an important role.

In February 2014, Francis named Manila Archbishop Luis Antonio Cardinal Tagle as one of the Synod’s 3 presidents-delegate. In this landmark of Francis’ papacy, Tagle served as a deputy of the Pope, the Synod’s president. Representing Asia, the Manila archbishop presided over the Synod’s discussions “in the name and by the authority of the Pope.”

Tagle is one of the Filipinos whom the Pope has appointed to plum posts from the beginning of his papacy exactly two years ago.

Since Francis’ election on March 13, 2013, the Pope has placed Filipinos in at least 10 key positions in the Catholic Church – from Tagle’s role as the Synod’s president-delegate to a Boholano archbishop’s job as the Vatican’s representative in the United Nations (UN).

In an interview with Rappler, a leading Asian theologian said these appointments show us 3 things: The most prominent among these is his role as the Synod’s president-delegate.

The most recently announced is the Pope’s confirmation of Tagle as president of the Catholic Biblical Federation (CBF), a 46-year-old group that helps bishops around the world in promoting the Bible. The CBF publicized Tagle’s election on March 8.

The Pope also appointed Tagle to the following positions:

Pontifical councils and congregations belong to the Roman Curia, a set of offices designed to help the Pope, which Francis wants to reform because it has also bred intrigue and corruption.

Tagle has been a member of a congregation and two pontifical councils even before Francis. Then Pope Benedict XVI named him to the following Vatican positions:

What’s notable, this time around, is that Francis named Tagle to more congregations. The Catholic News Agency explains that “while congregations have executive power, pontifical councils do not, and remain in the background of their own spheres of influence.”

While Tagle attended the meetings of these Vatican offices, another Filipino took the podium at the UN headquarters in New York to relay the Vatican’s stance on the conflict in the Middle East, climate change, and human rights, among other things. He is Archbishop Bernardito Cleopas Auza, a native of Talibon, Bohol, whose appointment the Vatican announced in July 2014.

He became the first Filipino to represent the Vatican before the UN.

Francis placed Auza in the UN after the Filipino served as the Vatican’s ambassador or apostolic nuncio to Haiti.

Months later, in February 2015, the Vatican said the Pope placed another Filipino archbishop in a key diplomatic post. 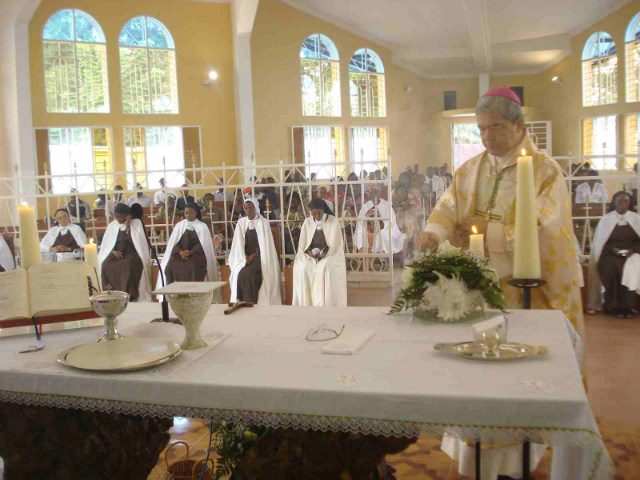 Francis named Archbishop Adolfo Tito Yllana, who was born in Naga City, as the apostolic nuncio to Australia. His new host country is one of the world’s 20 largest economies, where the percentage of Catholics declined to 25% in 2011 from 27% in 2001.

Previous popes had appointed Yllana as nuncio to Papua New Guinea and the Solomon Islands in 2001; Pakistan in 2006; and the Democratic Republic of Congo in 2010.

Aside from Yllana and Auza, two other Filipino archbishops represent the Pope as ambassadors. Archbishop Osvaldo Padilla is the apostolic nuncio to Korea while his brother, Archbishop Francisco Padilla, is the nuncio to Tanzania.

First cardinal from Mindanao, too In September 2014, the Vatican said Francis appointed Fr Gerard Francisco Timoner III, head of the Dominican Order in the Philippines, as member of the International Theological Commission (ITC).

Timoner, also the vice chancellor of the University of Santo Tomas, told Rappler that his Filipino context will help in his new assignment. He explained that the Philippines “really occupies a very important place” in Asian Catholicism.

Then in December 2014, Francis named Dr Gabriel Dy-Liacco, a Filipino psychotherapist, as a member of the Commission for the Protection of Minors.

Francis formed the commission to improve the Catholic Church’s response to the sex abuse cases involving its priests and bishops. The Vatican said Dy-Liacco can help the commission as a psychotherapist and counselor of “victims and perpetrators of abuse,” among others. The news service of the Catholic Bishops’ Conference of the Philippines said Dy-Liacco traces his roots to Camarines Sur.

In a move with both global and local impact, the Pope also earlier appointed Cotabato Archbishop Orlando Quevedo as the first cardinal from the southern Philippine island group of Mindanao. This move is global in impact because Quevedo, as cardinal, serves as the Pope’s adviser. From March 14 to 17, in fact, he is in Nagasaki, Japan, as the Pope’s special envoy to the “celebration of the centenary of the discovery of the ‘hidden Christians of Japan.’”

Until he turns 80, the 76-year-old Quevedo can also elect the Pope’s successor.

Because of the appointment of Quevedo and others after him, Asians now comprise around 11% of the cardinals who can elect the next pope. Two years ago, when Francis was elected, only “8.7% of cardinal electors were Asian,” the Vatican Insider reported.

Quevedo’s appointment as cardinal is also local in impact, on the other hand, because he represents Mindanao, the Philippines’ poorest island group that has endured a 4-decade Muslim secessionist movement.

Quevedo told Rappler he is ready to be a “spokesman” for his fellow bishops in Mindanao.

‘Time of the heirs’

Fr Jose Quilongquilong, president of the Jesuit-run Loyola School of Theology (LST), said the appointment of Filipinos to key positions is a “sign of affirmation” of the Philippines’ “special contribution to the universal mission of the Church.”

“It’s a recognition that we have special gifts, we have special skills and talents, that we can share now with the universal Church,” Quilongquilong said in an interview with Rappler on Thursday, March 12.

He also described it as a “sign of maturity.” The Philippines, he pointed out, is “no longer just receiving” from other countries.

He referred to the history of Christianity in the Philippines, which began when European missionaries baptized the Philippines’ first Catholics in the 16th century. Back then, he said, the Philippines was “at the receiving end.” “With these appointments, we are now, in a way, giving back or responding to the greater missionary calls of the Church by now serving other Christian communities,” Quilongquilong said.

A graduate of the Pontifical Gregorian University, the LST president himself served for 6 years as the Jesuits’ regional secretary for Asia-Pacific at the Jesuit headquarters in Rome.

In our interview, Quilongquilong also said Tagle’s appointment as Synod president-delegate is “to highlight the Asian Church.” He explained that the voice of Tagle, a professor at the LST, “is recognized as coming from Asia.”

Like Quilongquilong, Tagle believes it’s the Philippines’ time to “give back the faith” to Europe, which has suffered from a dwindling number of devout Catholics.

Citing an expression used by the Federation of Asian Bishops’ Conferences, Tagle explained: “It is the time of the heirs. We have received a legacy, an inheritance. You don’t use it only for your own advantage. You share it with others. You share it even with those who have given you a legacy.” – Rappler.com