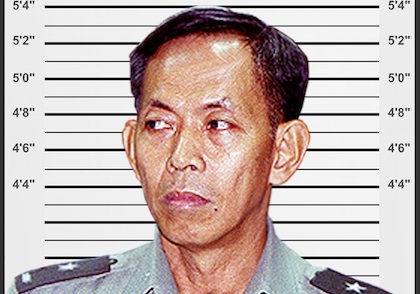 MANILA, Philippines – Once a fugitive, Sen Panfilo Lacson offered the government advice on how it can find the elusive retired Maj Gen Jovito Palparan.

Lacson said the government should tap its intelligence network to look into Palparan’s personal history and background. “These information will lead to clues on his whereabouts,” Lacson said.

Palparan has been hiding since December 2011, when a Bulacan regional trial court issued a warrant of arrest against him in connection with two cases of kidnapping and serious detention for the 2006 disappearance of students Sherlyn Cadapan and Karen Empeno.

Lacson himself went into hiding for 14 months, from January 2010 to March 2011, to evade the arrest warrant issued by Manila court in relation to the November 2000 murder of publicist Salvador Dacer and driver Emmanuel Corbito. He resurfaced after the Court of Appeals lifted the arrest warrant.

Lacson maintained that he’s innocent of the murder charges filed against him. He said he hid from authorities to avoid persecution by the previous administration of Gloria Macapagal-Arroyo.

Palparan, too, cited the supposed persecution against him by “Leftist allies” of President Aquino.

In his last interview before he went into hiding, Palparan told Rappler: Ilalagay mo ba sarili mo sa alanganin? Ang daming threat sa akin.” (Would I expose myself to trouble given the threats against me?)

The retired general recalled that previous reports have described him as a “dead man walking.” The threat got worse since the Aquino administration was allied with the Left, he said.