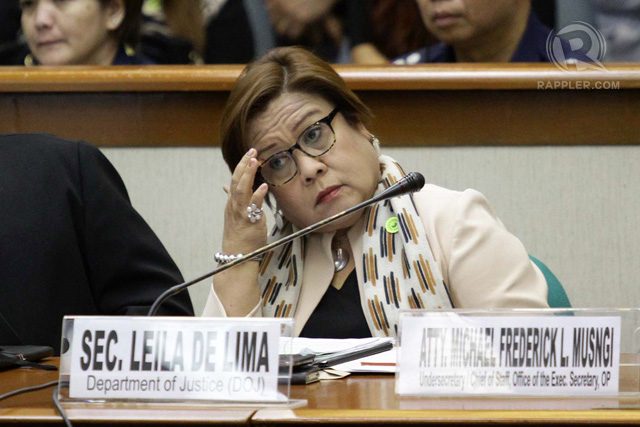 Facebook Twitter Copy URL
Copied
'Based on a wrong premise, the BOI Report on the nature of the President’s role can only arrive at a wrong conclusion,' says Justice Secretary Leila De Lima

MANILA, Philippines – Justice Secretary Leila De Lima on Saturday, March 14, said the police Board of Inquiry (BOI) made the “wrong conclusion” that President Benigno Aquino III broke the chain of command when he allowed a suspended police chief to participate in a critical operation of the Special Action Force (SAF).

“Based on a wrong premise, the BOI Report on the nature of the President’s role can only arrive at a wrong conclusion,” De Lima said in a statement a day after the BOI released its 130-page report. (READ: Cheat sheet: The truth and lies of Mamasapano)

Reiterating her arguments she gave before a Senate hearing, De Lima said the Philippine National Police (PNP) does not have a chain of command because it is no longer a part of the armed forces and has since turned into a civilian agency. (READ: Aquino urged: Explain ‘ill-defined chain of command’)

Citing a Supreme Court ruling in Carpio v. Executive Secretary, De Lima said Aquino is PNP’s chief executive and not its commander-in-chief. This means Aquino doesn’t have to follow a strict military chain of command. He can bypass even the police chief and opt to go straight to a subordinate.

“The PNP BOI cannot assume to impose upon the President his role and corresponding accountabilities as Commander-in-Chief of the PNP, without itself understanding the very nature of the PNP as a civilian agency that should relate to the President as its Chief Executive,” De Lima said.

She explained: “The BOI report gratuitously made the President privy to the PNPs erroneous dogma that he relates to the PNP as Commander-in-Chief. This unconstitutional and even illegal operating premise of the PNP cannot bind the President. The PNPs mistaken 28-year tradition of treating itself as part of the armed forces and the President as its Commander-in-Chief can never ripen into a statutory provision or legal principle, most especially since the Supreme Court has already declared the contrary as early as 23 years ago.”

The BOI report zeroed in on the liabilities of the sacked SAF commander and resigned police chief Director General Alan Purisima, who had no “power or authority” to take part in the operation while the suspension order of the Office of the Ombudsman was in effect. (READ: Police probers: Purisima acted without authority)

Aquino, however, ignored Purisima’s suspension and continued to get updates from him instead of Philippine National Police Officer-in-Charge Deputy Director General Leonardo Espina. (READ: Aquino bypassed chain of command)

The BOI scored the failure of Napeñas to properly coordinate with the military which could have prepared to provide support for the SAF commandos. Napeñas apparently counted on Purisima to make the coordination, based on his instructions to him after a meeting with President Benigno Aquino III in Malacañang.

De Lima said the BOI should have instead reviewed the PNP Manual that still treats itself as part of the armed forces and thus follows a chain of command.

“It should have revisited and assessed the applicability of a centralized chain of command to an organization that, unlike the AFP which has a singular and unitary line of command from the Commander-in-Chief up to the lowliest private, has several lines of command and authority that include not only the President or the PNP Chief, but also the National Police Commission and the governors and mayors of provinces, cities and municipalities,” De Lima argued.

“A PNP Manual laying down a chain of command cannot override the President’s constitutional and statutory prerogatives as Chief Executive. It cannot bind him to an erroneous understanding of the Constitution and the law. It cannot limit the President’s exercise of his powers as Chief Executive, including the exercise of the prerogative to go directly to a subordinate,” De Lima said.

“The PNP Manual, for all its affinity to a military chain of command and a military command structure, does not change the constitutional and statutory intent that policemen are no longer soldiers, that the PNP is no longer part of the armed forces, and that its officers no longer relate to the President as their Commander-in-Chief, but as Chief Executive,” she added.  – Rappler.com